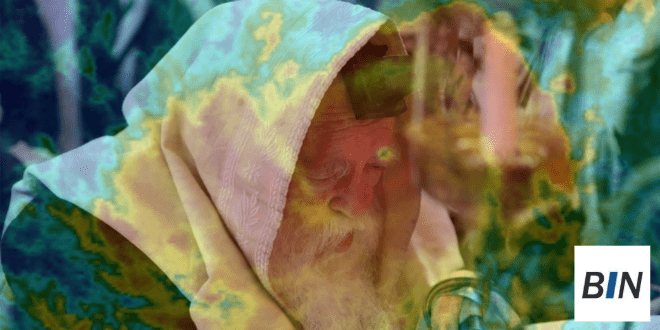 With one word, Rabbi Chaim Kanievsky, one of the most prominent rabbis of this generation, warned that Miami is in grave danger from Hurricane Irma and that people should evacuate.

On Wednesday, a rabbi was sent as an emissary to consult with Rabbi Kanievsky, an aged Torah scholar and one of the greatest spiritual leaders alive today, about the possibility that Hurricane Irma might hit Florida, wreaking havoc and endangering lives. The rabbi’s assistant explained the dire situation that was created when Hurricane Harvey hit the Gulf Coast of Texas two weeks ago. The assistant then explained the uncertainty over whether Hurricane Irma, now a Category Five Hurricane and the most powerful Atlantic hurricane on record, will make landfall in Florida.

“There was a hurricane two weeks ago, with a lot of wind and rain, and many people were killed,” Rabbi Kanievsky’s assistant said to the aged sage in Hebrew. “They evacuated some people, but for others it was too late. Now, they say the same thing may happen in Miami. They want to evacuate people on Shabbat (the Sabbath).”

The Jewish laws of Shabbat are very strict and breaking them is only permitted if an actual existential threat exists. Cases in which the danger is only in potential require a rabbinic ruling. If there is an actual danger, it is considered virtuous to preserve life by breaking Shabbat.

“The question is should the Jews listen to the [authorities] telling them to evacuate or no?” the rabbi was asked.

After several moment of consideration and thought, the rabbi answered with one word: “Sakana (danger).”

The rabbi was essentially making a Halachic (Torah law) judgement that since he considered the danger to be real, Jews are permitted to desecrate the Sabbath in order to evacuate the region.

On Wednesday, Irma slammed into the French Caribbean island territories of St. Martin and St. Barts, killing at least eight people and injuring 23. On Thursday, the storm hit Puerto Rico, leaving more than one million people without electricity and 56,000 people without water.

Though it is impossible to predict the path of a storm, meteorologists warned Irma could turn north and hit central Florida over the weekend. Florida’s Governor Rick Scott declared a state of emergency in all 67 counties in his state, ordering 7,000 National Guard troops to report for duty by Friday morning.

Even if Florida weathers through Irma, the hurricane generated woes may not be over. Irma is the second of three hurricanes that developed in the Atlantic Ocean while the solar eclipse passed overhead. At the time, meteorologists did not anticipate any of the three storm systems would develop into hurricanes.

Hurricane Harvey did develop, turning into one of the worst storms to ever hit America and the costliest natural disaster in US history. The second system, Irma, also exceeded predictions and is threatening to move onto Florida after leaving the Caribbean Islands devastated. The third eclipse-touched storm system, dubbed Jose, was just upgraded to a Category 1 hurricane and is en-route to the islands its sister storm recently left.