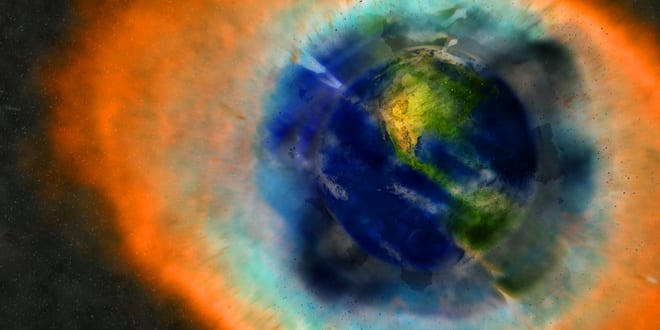 One week before a rare solar eclipse transversed the continental United States, Breaking Israel News ran a series of articles concerning the prophetic implications of the event. Four days later, a hurricane of Biblical proportions slammed into the Gulf Coast of Texas, conforming precisely to the predictions and leading to deeper understandings of the prophecies.

Rare in its own right, ten days ago the eclipse passed over the US from west to east and moved out to sea. Its path of totality passed through a developing hurricane, resulting in a doubly rare confluence of events. At the time, meteorologists were doubtful the eclipsed tropical storm would develop into a full-blown hurricane.

The storm did indeed develop, with a vengeance. Four days after the eclipse, Hurricane Harvey made landfall on the Gulf Coast of Texas, the first major hurricane to do so in over a decade. The hurricane resulted in unprecedented flooding that prompted more than 13,000 rescues, displaced more than 30,000 people, and inundated hundreds of thousands of homes.

At least 38 confirmed deaths have been attributed to the hurricane and damages are estimated at up to $160 billion. Federal Emergency Management Agency director Brock Long called Harvey the worst disaster in Texas history, and said he expects the recovery to take many years.

The first article cited the Yalkut Moshe, written by Rabbi Moshe ben Yisrael Benyamin in Safed in 1894. Rabbi Benyamin wrote that when a solar eclipse occurs at the beginning of the Hebrew month of Elul, as this one did, “It is a bad sign for the other nations, bringing great damage to the kings of the East, and bringing great storms.”

At the time, the developing political storm between North America and North Korea seemed much more ominous than the clouds over the Atlantic, and Rabbi Yosef Berger, the rabbi of King David’s Tomb on Mount Zion, suggested that the prophecy was referring specifically to Kim Jong Un, the supreme leader of the rogue Asian nation.

Though the section of the prophecy concerning the ‘kings of the east’ is still developing, and recently intensified after North Korea fired a missile over Japanese airspace. But the part of the prophecy predicting major storms has fully materialized in dramatic fashion. In light of the prophecy come true, Rabbi Berger sees the Hand of God clearly guiding last week’s sequence of events.

“With two such amazing natural phenomenon happening one right after the other, it is clear that this is a divine event, precisely what the prophecies were speaking about,” Rabbi Berger said to Breaking Israel News.

Rabbi Berger explained that in Hebrew, the word for world (olam) comes from the root of the word for ‘hidden’.

“God hides himself behind nature, but occasionally, he pulls the curtain aside a bit and we get to see Him acting directly in the world,” Rabbi Berger said. “This was an opportunity to see this and to strengthen our belief. The reason why prophecy exists, the reason why holy men wrote about these future events, is that when it happens as clearly as it did here, it is undeniable proof that God’s word is true.”

Rabbi Berger emphasized that this was not a case of divine vengeance directed at the victims of the hurricane.

“Even though natural catastrophes are God’s aspect of judgement, it is not a punishment,” Rabbi Berger said. “It was prophesied that this would come, to wake the world up, to bring everyone back in tshuva (repentance).”

Before the eclipse, Rabbi Pinchas Winston, an end-of-days expert and prolific author, perceived the astronomical event as having religious implications. Now that the hurricane has struck, he is even more convinced that this is true.

“There was a solar eclipse, there were prophecies, and there was a catastrophic hurricane  directly after. It must be pointed out that these are certainly noteworthy events that seem connected.

“Scientifically, something has to occur only once in 20 times to be called a phenomenon. The odds of all of this coming together in such close proximity are far greater, and this means it is something to think about, especially for the person who does not believe in coincidence.”

Rabbi Winston noted that nature represents the aspect of God that brings judgement, but, like Rabbi Berger, emphasized that this judgement was not aimed at the people of Texas.

“Clearly not only ‘guilty’ people are suffering. Who even knows who deserves to or doesn’t? Those are God[ly] decisions,” Rabbi Winston emphasized. “However, the Zohar (foundational book of Jewish mysticism) states that a nation has a blessing until it fulfills its seah, its divinely-determined limit of immoral behavior. America has a lot of merit, especially given its role in the development of the state of Israel. But, given its current moral direction, one has to wonder if that limit is being reached.”

Before the eclipse, Rabbi Lazar Brody, a  an American-born Hasidic rabbi and teacher, believed Hurricane Harvey and the eclipse were definitely connected on a spiritual level.

“First an eclipse and then four days later a hurricane,” Rabbi Brody said to Breaking Israel News. “This is a no-brainer.”

Rabbi Brody said two weeks ago that the eclipse signalled an end of an era in America. In one sense, Hurricane Harvey has brought this prediction to light.

According to the Talmud, the sun and the moon were created the same size but God then made the moon smaller. The rabbi explained that Israel is compared to the moon, and the nations are compared to the sun.

“In the days of Moshiach (Messiah), the sun and the moon will return to being the same brightness,” Rabbi Brody said. “Israel was supposed to lead the world to God and Torah, but that is only after the Moshiach.The eclipse graphically illustrated that, and the hurricane showed the limits of physical strength. What we are seeing now is a prelude to Moshiach.”