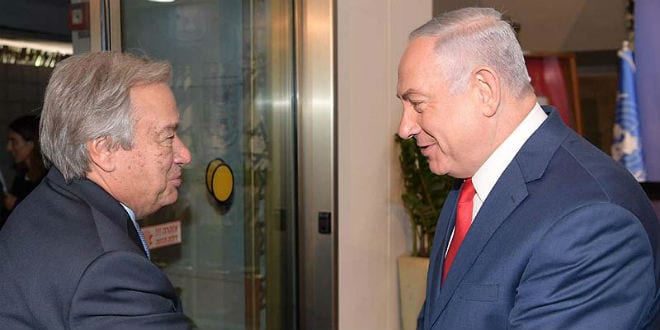 Prime Minister Benjamin Netanyahu on Monday met with UN Secretary-General António Guterres at the Prime Minister’s Office in Jerusalem, where he told his guest about the imbalance in the international organization treatment of Israel. “There is no doubt that the UN has a discriminatory attitude towards Israel, but I hope you will have an opportunity to see the strong Israel that works to acquire knowledge for the benefit of our people and humanity as a whole,” Netanyahu said.

According to Netanyahu, the United Nations failed regarding Israel, as its cultural arm, the United Nations Educational, Scientific and Cultural Organization (UNESCO) is making a mockery of the world’s heritage when it denies the connection of the Jewish people to Jerusalem. Netanyahu added that the UN is in charge of peace, but it allows Palestinian hatred to flourish in its institutions.

Netanyahu added that the time has come to renew the moral clarity of the UN. “I know that this is a big undertaking, and that the Secretary-General has no power over the member states, but I believe that your leadership can be meaningful, you can make an important change,” he said.

Guterres told Netanyahu, “As secretary-general of the United Nations, I am totally committed to be […] adamant” about Israel’s right to exist.” He added, “I understand the security concerns of Israel and I repeat that the idea or the intention or the will to destroy the state of Israel is something totally unacceptable from my perspective.”

“I have always had a dream that I would be able to see in the Holy Land in which Jerusalem is clearly a city linked – deeply linked – to three religions [with] two states living together, in mutual recognition, but also in peace and security,” the UN Secretary-General said.

Guterres also met with Israeli President Reuven Rivlin on Monday. Rivlin told the UN chief, “I call upon you, Mr. Secretary General, to work to end the discrimination against Israel in some branches of your organization.”

“Those that call for the destruction of the State of Israel is a form of modern anti-Semitism,” Guterres acknowledged in return, adding, “We will always be very frank in the dialogue with the State of Israel in trying to find ways for peace to be possible in this region, but we will always be very committed to make sure anti-Semitism doesn’t prevail and that equality in the treatment of all states is fully respected.”

In Netanyahu’s meeting with Guterres, the prime minister turned to politics in the region, telling him, “Iran is busy turning Syria into a base of military entrenchment and it wants to use Syria and Lebanon as warfronts against its declared goal to eradicate Israel. It is also building sites to produce precision-guided missiles towards that end in both Syria and in Lebanon. This is something Israel cannot accept. This is something the UN should not accept. And I intend to speak to you at great length about this, and other tasks that I believe are important for the makings of peace and security in the world.”

To which Guterres responded that he would “do everything in my capacity” to make sure the UNIFIL peacekeeping force fulfills its task along Israel’s border with Lebanon. The peacekeeping force’s mission is up for renewal at the end of August, and Israel an increased presence of the UNIFIL to monitor and prevent a future Hezbollah attack.