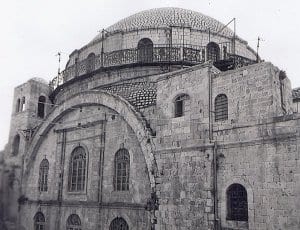 In the center of the Jewish Quarter in the Old City of Jerusalem stands a magnificent and breathtaking building. The tallest building in the area, its domed roof, stained glass windows and high balcony leave a powerful impression on passersby, but the story of the Hurva Synagogue, with a message for the Jewish people, is even more inspiring than the structure itself.

In 1700, Yehudah Ha-Hasid immigrated to Israel with a group of 500 European Ashkenazi Jews. After only a few days in the holy city of Jerusalem, the group’s leader died, leaving his followers despondent.

The group began to build a life for themselves in Jerusalem with some homes and a small synagogue. Eventually, they started construction on a more magnificent house of worship, but the venture proved to be too expensive to continue. They could not repay the loans necessary, and in 1720 the Arab lenders set the synagogue on fire.

The Jewish leaders were imprisoned and the immigrants were expelled from Jerusalem. The pile of rubble that was once the community’s synagogue became known as the “Ruin (Hurva) of Rabbi Yehudah Ha-Hasid.”

In the 1800s, a second group of Ashkenazi Jews, disciples of the Gaon of Vilna, came to build a new synagogue in the destroyed Ashkenazi courtyard. With financial backing, mainly from the Rothschild family and Sir Moses Montefiore, 1864 saw the inauguration of a magnificent Ashkenazi synagogue in the Old City. Nothing of such grandeur had been built by the Jews of Jerusalem since the Second Temple. Its domed roof towered high above the surrounding buildings, and its interior was intricately decorated. Visiting rabbis and dignitaries would make a point to stop and worship there.

In May of 1948, Jordanian forces entered the Old City of Jerusalem. They detonated a barrel filled with explosives against the exterior wall of the Hurva Synagogue, creating a gaping hole to allow them to enter. The Jordanians succeed in flying their flag from the roof of the synagogue and announced victory over the Old City. Then they blew up the magnificent structure, reducing it once again to a pile of rubble.

For the next 19 years, the Old City was inaccessible to Jewish visitors. Even prayers at Judaism’s holiest sites, such as the Western Wall, were prohibited to Jews. But in June of 1967, during the miraculous victory of the Six-Day War, Israel regained sovereignty over all of Jerusalem, including the Old City. For the first time in 2,000 years, Jews were in control of the holy city.

There was immediately disagreement as to what to rebuild at the site of the destroyed Hurva synagogue. Some wanted a new synagogue built in a contemporary style, while others felt it would be meaningful to rebuild the synagogue in its original form, paying homage to the once grand building. Some groups wanted the new building to become a museum telling the history of the Jewish struggle for the Old City, but most felt it was only right for the new building to serve once again as a house of worship and study hall.

While no decision was made, a commemorative arch, a recreation of one of the original supportive arches of the synagogue, was built in 1977 as a statement that the synagogue would be rebuilt. But it was not until the year 2000, 33 years after the Old City was reclaimed and 62 years after the building’s destruction, that government officials decided to rebuild the synagogue in its original Ottoman style. In March of 2010, the official opening of the Hurva Synagogue took place.

Today, the synagogue is an active house of worship, hosting daily prayers, bar mitzvah and circumcision ceremonies. It is also a must-see landmark site in the Jewish Quarter of the Old City. Visitors can take a tour of this grand structure, highlighted by a breathtaking 360-degree view of the Old City from the balcony surrounding the synagogue’s great dome.

It stands as a living symbol of the Jewish struggle to rebuild its land, a place where Jewish life is celebrated where once it was destroyed.

The story of the Hurva Synagogue appears in Then & Now: 16-Month Jewish Calendar and Holiday Guide 2017/2018 by Israel365. Click here to learn more and purchase.