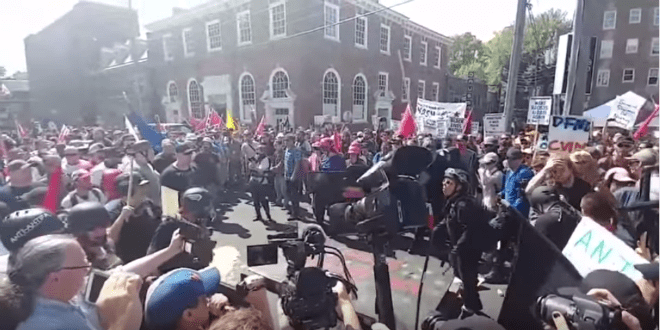 Governor Terry McAuliffe declared a state of emergency in downtown Charlottesville, Virginia on Saturday, blaming “mostly out-of-state” white nationalist protesters for a morning of violent clashes. White alt-right activists and white supremacists clashed with counter-protesters as police dispersed the crowd at a rally against city’s decision to remove the statue of Confederate General Robert E. Lee from a city park.

Three people are reported dead as a result of the violence. A woman was killed and more than a dozen others injured when a 20-year-old man rammed his car into a crowd of people protesting the white nationalist rally, and a pilot and a state trooper were killed when a Virginia State Police helicopter responding to the riots crashed outside Charlottesville.

“Governor McAuliffe has declared a state of emergency to aid state response to violence at Alt-Right rally in Charlottesville,” the governor tweeted. He then issued a statement saying, “I am disgusted by the hatred, bigotry and violence these protesters have brought to our state over the past 24 hours.”

According to McAuliffe, state troopers and the Virginia National Guard are on hand to support the local authorities.

President Donald Trump weighed in on the morning riots at 1 PM, tweeting:

We ALL must be united & condemn all that hate stands for. There is no place for this kind of violence in America. Lets come together as one!

The ADL issued a tweet urging folks to sign its online “Diversity Is Strength” petition, protesting anti-Semitic statements by Michael Hill, organizer of the Charlottesville Unite the Right rally. Hill originated the battle cry, “If you want to defend the South and Western civilization from the Jew and his dark-skinned allies, be at Charlottesville on 12 August.”

The fighting broke out in Charlottesville on Friday night and continued into Saturday morning. Emancipation Park, was packed with hundreds of neo-Nazis, Ku Klux Klanners and white nationalists wearing helmets and carrying bats and clubs who were challenged by about as many opponents, led by Princeton professor Cornell West and including clergy and Black Lives Matter activists.

One neo-Nazi protester called the government forces attempting to shut down the rally “Jew-lovers”, telling Fox News that the “f**king Jew-lovers are gassing us”.

House Speaker Paul Ryan (R-Wis.) tweeted: “The views fueling the spectacle in Charlottesville are repugnant. Let it only serve to unite Americans against this kind of vile bigotry.”