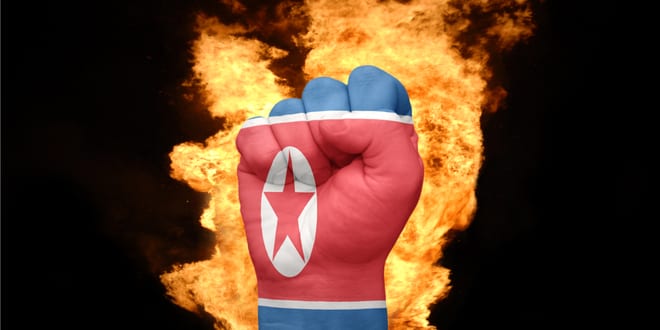 The exchanges between North Korea and the US are taking on even more ominous tones as President Donald Trump takes a strong stand against a despotic regime that is responding with threats containing explicit nuclear threats.

“North Korea best not make any more threats to the United States,” President Trump said in a press conference at his New Jersey resort of Bedminster on Tuesday. “They will be met with fire and fury like the world has never seen.”

Clearly unintimidated, the North’s Korean People’s Army (KPA) released a statement on Wednesday in state-run KCNA news threatening to attack Guam, a US island territory 2,100 miles distant from North Korea. The threat went even further to include mainland America.

“The US should [remember], however, that once there observed a sign of action for ‘preventive war’ from the US, the army of the Democratic People’s Republic of Korea (DPRK) will turn the US mainland into the theater of a nuclear war before the inviolable land of the DPRK turns into the one,” the statement said.

“It is a daydream for the US to think that its mainland is an invulnerable Heavenly kingdom. The U.S. should clearly face up to the fact that the ballistic rockets of the Strategic Force of the KPA. are now on constant standby, facing the Pacific Ocean and pay deep attention to their azimuth angle for launch.”

Secretary of State Rex Tillerson reassured concerned Americans that the president’s incendiary statement was intentionally framed in extreme language the North Koreans would be sure to understand.

“In response to that, North Korea’s rhetoric is just ratcheted up, louder and louder and more threatening,” Tillerson told reporters on Wednesday. “What the president is doing is sending a strong message to North Korea in language that Kim Jong Un would understand because he doesn’t seem to understand diplomatic language.”

“I think Americans should sleep well at night, have no concerns about this particular rhetoric of the last few days,” he added.

Guam’s governor, Eddie Calvo, reacted to the threat in a statement he made on Facebook on Wednesday, reassuring the civilian residents of the island.

“I have reached out to the White House this morning,” he wrote. “An attack or threat to Guam is a threat or attack on the United States. They have said that America will be defended.”

This bombastic give-and-take is an ongoing cycle that has been characteristic of the growing tensions between the two countries. After the US Treasury Department recently enacted economic sanctions on North Korea in response to two illegal intercontinental ballistic missiles (ICBM) tests last month, the UN Security Council followed suit with additional sanctions against the rogue nation.

In conjunction with their missile program, North Korea exploded two nuclear devices last year, raising concerns that the improvements in their nuclear weapons program matched with their new ICBMs pose a serious threat to other countries.

Japan confirmed this fear when they released a statement on Tuesday warning that they believe North Korea is now capable of miniaturizing its nuclear weapons and mounting them on ICBMs. Guam is acknowledged to be within range of North Korean middle and long range ICBMs.