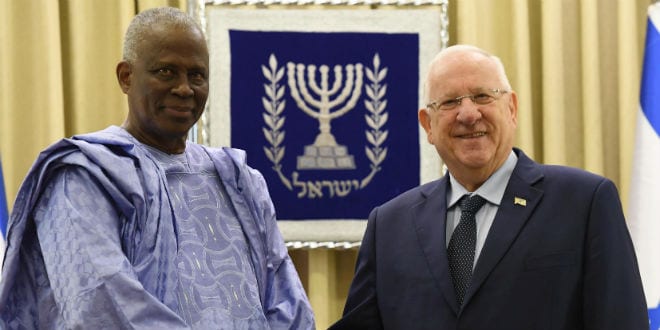 Ties between Israel and Guinea were cut in 1967 and renewed last year, while Israel downgraded its ties with Senegal after Dakar co-sponsored United Nations Resolution 2334 condemning Israeli settlements in December 2016. Ties between the countries were restored and Israel returned its ambassador to Dakar in June after Prime Minister Benjamin Netanyahu met with Senegalese President Macky Sall on the sidelines of the Economic Community of Western African States (ECOWAS) summit in Liberia. Neither country had previously appointed an ambassador to Israel.

“Relations between us were cut off for a very long time, too long a time,” Camara said, adding that the West African nation was open for business with Israel. “Guinea wants to cooperate with Israel and in particular to become the gateway for Israel to reach the rest of Africa. ”

Rivlin told Camara that “Israel sees the future in Africa” and that “ties with Africa are of the utmost importance.”

The Senegalese non-resident ambassador Talla Fall, who will work out of Cairo, described himself as a true friend of Israel and said relations between the two countries were very good.

Netanyahu has invested heavily in relations with Africa, making three trips to the continent in the past year after 29 years in which a sitting Israeli prime minister had not visited the continent. Netanyahu hopes that in the long-term, the strengthening of ties with African nations will break the automatic Arab majority at the United Nations.

On Monday Netanyahu hosted the president of Togo, Faure Gnassingbé, in Jerusalem. The Togolese president wrote in the guest book at the prime minister’s residence: “I am dreaming of Israel’s return to Africa and Africa’s return to Israel.” Togo is a true friend of Israel!

Togo is due to host an Africa-Israel summit in October.