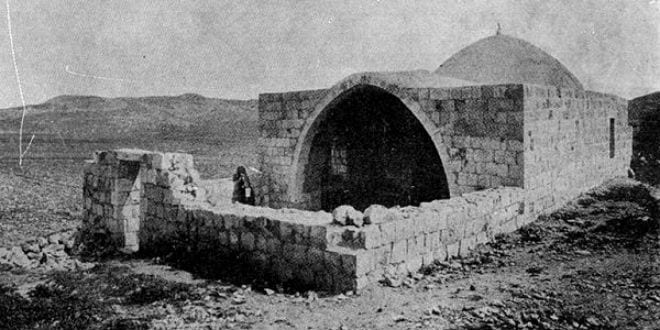 An estimated 1,000 Jews arrived on Monday night for an overnight prayer vigil at the Tomb of Joseph adjacent to the Biblical city of Shechem (Nablus). The gathering, intended to celebrate Tu B’Av, the Jewish holiday of love, was described in Palestinian media as a military onslaught in which, “Talmudic rituals … caused clashes with the Palestinian locals”.

The visit was coordinated with the IDF. Dozens of soldiers secured the site and no incidents of violence were reported. The visit was to celebrate the minor holiday of Tu B’av (the fifteenth day of the Hebrew month of Av). According to the Talmud (Ta’anit 30b-31a), Tu B’Av was a joyous holiday in the days of the Temple, marking the beginning of the grape harvest. On that day, the unmarried girls of Jerusalem dressed in white garments and went out to dance in the vineyards.

Celebrating the holiday of love at Joseph’s Tomb is powerfully significant. Jacob specifically granted the region to Joseph in his deathbed blessing.

And now, I assign to you one portion (Shechem) more than to your brothers, which I wrested from the Amorites with my sword and bow. Genesis 48:22

Shechem son of Hamor the Hivite, chief of the country, saw her, and took her and lay with her by force. Genesis 34:2

In comparison to the brutish residents of Shechem, Joseph was the archetypal icon of sexual restraint, refusing to lay with Potiphar’s wife when she tried to seduce him.

And much as she coaxed Yosef day after day, he did not yield to her request to lie beside her, to be with her. Genesis 39:10

Many adherents of Breslov, a branch of Hasidic Judaism, visit the Tomb of Joseph regularly. They see the Biblical character of Joseph as the embodiment of sexual purity and praying there a tikkun (fixing) for Shechem, the epitome of sexual impurity. Joseph was buried in Shechem in order to fix this aspect of impurity, and Tu B’Av is the holiday celebrating this.

“The settlers provocatively carried out Talmudic rituals in the area, which caused clashes with the Palestinian locals,” PNN reported.

Ma’an News, a Palestinian news service, downsized the gathering and the hostilities, reporting that “hundreds of Israelis” arrived at the site in “more than 40 buses”.

The site has a significant and contentious role in modern Israel. Conquered by Israel in 1967, it became an important pilgrimage destination for devout Jews. In December 1995, in accordance with the Oslo Accords, the area around Nablus was handed over to the Palestinian Authority, though several Jewish religious sites, including Joseph’s Tomb, remained under Israeli jurisdiction.

In  September 1996, the site came under attack and hundreds of Palestinians stormed the tomb. Despite the Oslo Accords, the IDF issued an order severely limiting Jewish access to the site. The site has been vandalized and burned several times since.