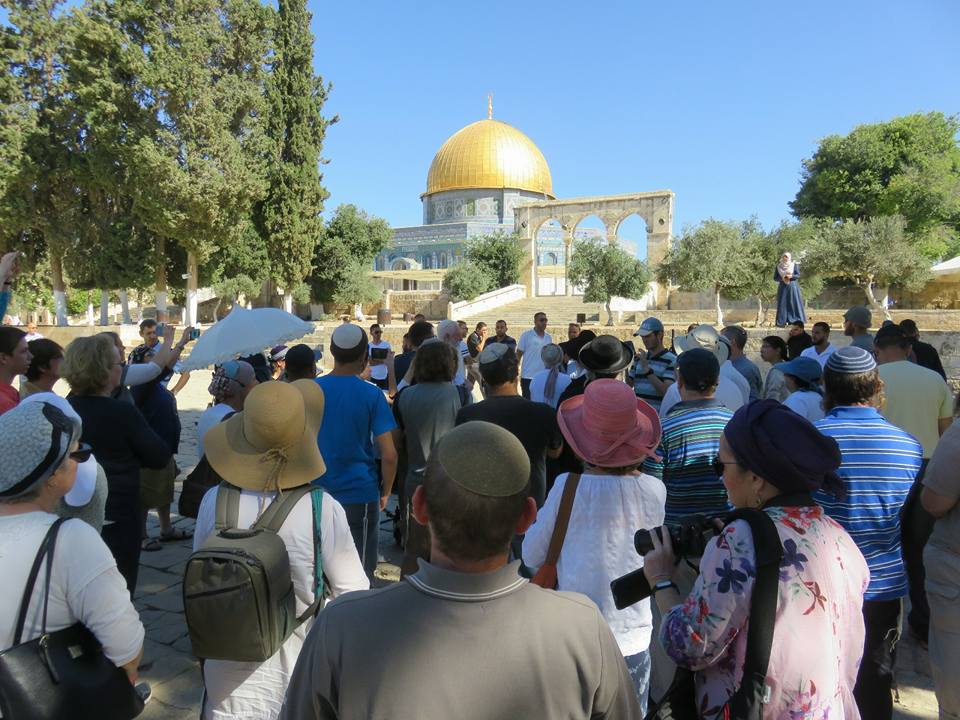 The Temple Mount—a site of significance to the world’s three major monotheistic religions of Judaism, Islam and Christianity—remains in the middle of a geopolitical standoff as Jews described as “ideological” are visiting the Muslim-controlled prayer compound in greater numbers.

More than 1,300 Jewish visitors ascended the Temple Mount Aug. 1 on the annual Tisha B’Av day of mourning over the First and Second Jewish Temples, which were both destroyed on the 9th day of the Hebrew month Av, in years 587 B.C. and 70 A.D., respectively.

The number of Jewish visitors in a single day on August 1 was the most permitted by Israeli police to enter the site since Israel’s reunification of Jerusalem in 1967. Tens of thousands of additional Jewish worshipers prayed at the Western Wall complex adjacent to the Temple Mount.

According to Israeli law, Jews are permitted to visit the Temple Mount, but not to utter words of prayer. Several Israeli worshipers were arrested this past week for praying at the site. Members of the Jordanian Islamic Waqf, which administers the site, follow the Jewish visitors to ensure that they do not pray. Israeli police also follow the Jewish visitors to ensure that members of the Waqf do not harm them.

Yitzhak Reiter—a professor of Middle East, Israel and Islamic studies at Ashkelon Academic College, and a senior researcher at the Jerusalem Institute for Policy Research—said Arabs within Israel, Jordan and the greater Islamic world have taken note of the increased visits by Jews to the Temple Mount. Reiter warned that these visits might be used as a pretext for additional terror attacks.

The recent Temple Mount controversy was ignited July 14, when Arab terrorists killed two Israeli Druze policemen near the holy site. Israel immediately installed metal detectors at the site, and Arabs rejected the bolstered security measures by refusing to enter the Al-Aqsa mosque complex and rioting in eastern Jerusalem. Amid the riots, an Arab terrorist murdered three members of an Israeli family in their home, during a Friday night meal July 21 in Halamish. Due to fear of additional violence, Israel removed the metal detectors in an attempt to restore calm.

“Jewish groups are ascending the Mount in more and more numbers. They are being considered ideological visitors, and the [Jordanian] Waqf, the Islamic Movement and others are reacting,” Reiter told JNS.org. “There are challenges ahead of us, and any minor incident can bring us back to the same situation.”

In a poll conducted by Israel’s Channel 2, more than three-quarters (77 percent) of Israelis said Israel’s security cabinet “capitulated” in its decision to remove the metal detectors, while 67 percent of respondents took a negative view of Israeli Prime Minister Benjamin Netanyahu’s handling of the crisis.

In response to the general dissatisfaction, perceived by Israelis as a display of weakness by their government, Netanyahu told the security cabinet July 30, “I am attentive to public feeling. With that, as the prime minister of Israel, as the one who carries on his shoulders the responsibility for the security of Israel, I must make decisions coolly and judiciously. I do that out of a view of the big picture, a wide view of the challenges and threats that are facing us. Some of them are not known to the public and as is the nature of things I can’t go into details.”

While Israel has sovereignty over all of Jerusalem, custodianship of the Temple Mount and other Islamic holy places in the city belong to the Jordanian Waqf, which controlled the Temple Mount during Jordan’s illegal occupation of Jerusalem and the disputed territories from 1948-1967. Israel controls the perimeter of the complex.

Dr. Oded Eran, Israel’s former ambassador to Jordan, told JNS.org that Jordan “plays a significant role in the decisions taken by Israel on the Temple Mount, to begin with because of the international peace treaty signed between Israel and Jordan in 1994, in which Israel recognized the special interests that Jordan has in Islamic sites in Jerusalem.”

Israeli media reported that the head of Israel’s General Security Service went to Jordan to negotiate the removal of the metal detectors. “I think that Jordan played a paramount role in the solution of the crisis around the Temple Mount in the last two weeks,” said the Ashkelon Academic College’s Reiter.

Yet according to Reiter—who has authored several books on the geopolitics of the Temple Mount—while Jordan plays a diplomatic role in conversations on the status of Islamic holy sites in Jerusalem, the Waqf holds the power to instigate violence, but not the power to prevent violence.

“The Palestinian street’s rioting was a main cause of the decision to remove the metal detectors,” Reiter said.

“The Waqf can incite, and it is a signal to the Palestinian public to go and riot,” he said. “But once a violent accident occurred on the Temple Mount, the Waqf is not the party who is able to calm things down. It is not so powerful. It’s not an authentic leader of the Palestinians in east Jerusalem and the West Bank.”

Once the metal detectors were removed, the current Arab pretext for violence against Israel was removed as well. Yet Israel’s backtracking on security measures at the sensitive holy site may have lasting consequences.

“Palestinians realize that Israel had to withdraw and they feel that they had a victory by rallying the people to the street, and they may use it in future campaigns with Israel,” Reiter said.

“Arabs around Israel see this as a matter of victory,” he said, “and they are celebrating.”