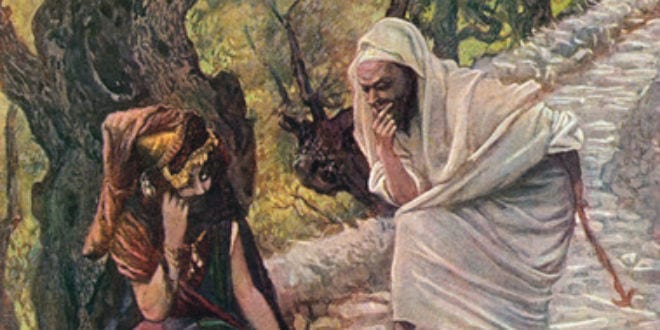 In a new course offered by Yeshiva for the Nations, “Genesis: A Promised Land for a Promised Time,” Rabbi Weisz takes students through the opening book of the Bible, tracing the origins of the Jewish understanding of the Messiah. Yeshiva for the Nations is a Jewish school for religious studies, designed for non-Jews. Registrants dip into the deep wells of Jewish knowledge by engaging with Jewish texts through the eyes of an Orthodox Jewish teacher.

“Anyone who cares about the Moshiach (Messiah) or is trying to understand his role in the world, has to go all the way back to the beginning, to the Book of Genesis,” Rabbi Weisz told Breaking Israel News.

The birth of the Jewish Messiah begins with the unlikely, controversial and even scandalous relationships between Lot and his daughter (Genesis 19) and between Judah – the fourth son of the patriarch Jacob and his first wife, Leah – and Tamar, Judah’s daughter-in-law.

Yehuda went up to Timnah to his sheepshearers, together with his friend Hirah the Adullamite. And Tamar was told, ‘Your father-in-law is coming up to Timnah for the sheepshearing.’ So, she took off her widow’s garb, covered her face with a veil, and, wrapping herself up, sat down at the entrance to Enamel, which is on the road to Timnah…When Yehuda saw her, he took her for a harlot; for she had covered her face.

So he turned aside to her by the road and said, “Here, let me sleep with you”—for he did not know that she was his daughter-in-law…So he slept with her, and she conceived by him… (Genesis 38: 12-18).

Ultimately, Tamar gave birth to two sons, Peretz and Zerach. Rabbi Weisz explains that according to Jewish tradition, it is through Peretz that the Moshiach will be born.

“Like a puppet master operating behind the scenes and hidden from view, God is pulling the strings and directing events without the knowledge or understanding of the participants themselves,” explained Rabbi Weisz. “From the union between Yehuda and Tamar, the Davidic dynasty and ultimately the Moshiach himself would emerge.  Precisely when life seems to be completely unraveling, Hashem is directing events with His infinite wisdom, and is carefully nurturing our redemption.”

Rabbi Weisz said that one might assume the Messiah would come from a line of “blue-blooded aristocracy” – the most prestigious line the Jewish people could offer. Rather, we see from Genesis, that the opposite occurs. The Messiah is born from the most embarrassing, scandal-ridden ancestry one might imagine.

A Promised Land for a Promised Time

The rabbi notes that this situation is not dissimilar to the restoration of the Land of Israel, which occurred thousands of years later. Israel, he said, was re-birthed out of the ashes of the Holocaust and by a group of secular – not religious – Jews.

“This teaches us something fundamental and beautiful about God’s plan for salvation,” said Rabbi Weisz. “It will come about through the lowest of low. It is a fundamental Jewish lesson we see throughout the Book of Genesis: Anyone has the potential to lift themselves up and to elevate themselves, their community, and as we see here, even the whole world.”

Do you want to learn more? Rabbi Weisz’s new course on the Book of Genesis, “Genesis: A Promised Land for a Promised Time,” is available through Israel365’s Yeshiva for the Nation. For more information or to watch the online course, visit yeshivaforthenations.com.