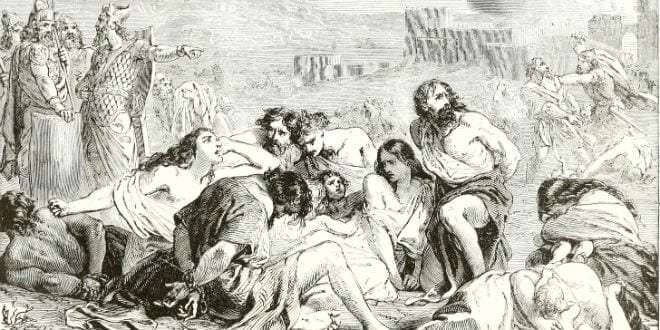 A recent study of genetic material taken from 4,000-year-old skeletons links the modern Lebanese to the Biblical Canaanites, leading to “debunking” claims by scientists that the Biblical narrative commanding the Israelites to wipe out the occupants of the land is false. A closer look shows that the study actually proves the Biblical version is accurate, and that scientists should pay closer attention to the Bible.

As the pre-Israelite pagan inhabitants of the Promised Land, Canaanites played a major role in the Biblical narrative, and the Jews were commanded by God to utterly wipe them out from the land.

In the towns of the latter peoples, however, which Hashem your God is giving you as a heritage, you shall not let a soul remain alive. No, you must proscribe them—the Hittites and the Amorites, the Canaanites and the Perizzites, the Hivites and the Jebusites—as Hashem your God has commanded you. Deuteronomy 20:16

A recently published report on genetics performed by the Wellcome Trust Sanger Institute contests this Biblical version of the Canaanites’ fate.

The study sequenced genomes from bones taken from 4,000-year-old Canaanite skeletons found in Sidon, a coastal city in Lebanon. The results were compared to samples from 99 modern-day Lebanese. The results of the study, published last week in American Journal of Human Genetics, revealed that 93 percent of the ancestry of modern Lebanese comes from the ancient Canaanites.

“The Bible reports the destruction of the Canaanite cities and the annihilation of its people,” the study states. “If true, the Canaanites could not have directly contributed genetically to present-day populations. However, no archaeological evidence has so far been found to support widespread destruction of Canaanite cities between the Bronze and Iron Ages: cities on the Levant coast such as Sidon and Tyre show continuity of occupation until the present day.”

A large number of media outlets cited this study as a “debunking” of the Bible. The Express, based in the UK, posted the headline, “The Bible was WRONG: Civilisation God ordered to be KILLED still live and kicking”. The article went on to say, “Scientists have unearthed a false claim in the Bible after scientists discovered living descendants of a civilisation that was supposedly wiped out by the Israelites following ‘God’s orders’.”

Rabbi Pinchas Winston, a prolific author and end-of-days expert, explained to Breaking Israel News that not only doesn’t the study disprove the Bible, it actually proves its accuracy. Rabbi Winston explained that the confusion arose from a misunderstanding of the Biblical account.

“Despite the Torah commandment, even in Biblical times, the Canaanites were not wiped out,” Rabbi Winston told Breaking Israel News. “The Israelites were permitted to make deals with them, allowing them to remain in the land as slaves. And if they fled outside of Israel, there was no requirement to chase them down.”

This was stated explicitly in the Book of Joshua.

When the Israelites became stronger, they imposed tribute on the Canaanites; but they did not dispossess them. Joshua 17:12

This was reiterated later in the Book of Judges.

The Canaanites persisted in dwelling in this region. And when Yisrael gained the upper hand, they subjected the Canaanites to forced labor; but they did not dispossess them. Judges 1:27-28

In fact, contrary to the scientists’ claims and the far more egregious headlines, Rabbi Winston asserted that the discovery of a Canaanite gene pool outside of Israel, separate and distinct from the Jews, is proof of the Bible’s account.

“They were not wiped out in the Bible, so of course they would still exist,” the rabbi said. “But not in Israel.”

The existence of Canaanites raised a difficult end-of-days question: Do Jews have a Biblical commandment today to eliminate the newly identified Canaanites as the Israelites did when they first entered Israel after the Exodus?

“According to the Rambam, King Sennacherib (the Assyrian king from the 8th century BCE) mixed up all the nations,” said Rabbi Winston. “It is no longer possible to state definitively that a certain people are descended from a specific Biblical nation.”

Rabbi Winston said that conjecture about national characteristics for theoretical purposes is possible, but when it comes to practical implications, such as declaring war, the nations are not well-enough defined.