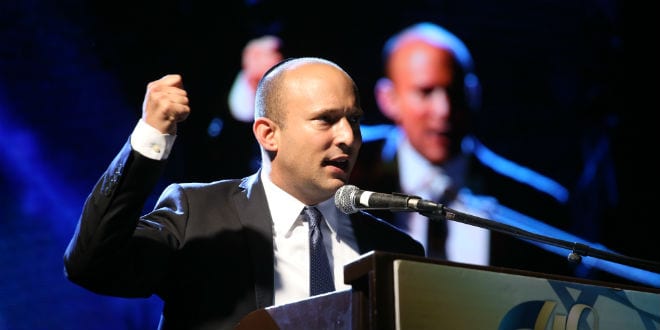 Verbal fireworks went off in the Knesset plenum Wednesday afternoon as Education Minister Naftali Bennett called for national unity in the war on terror and accused Arab MKs of promoting lies in order to incite violence against Israel.

“Some of the leaders of Israeli Arabs, from Sheikh Raed Salah onwards, including some people sitting here: MK Hanin, MK Ahmed Tibi. In this hall, in the Israeli Knesset, are partners in a blood libel. A simple blood libel against Israel.

“(But) you know the Temple Mount is open to all. You know it isn’t true that al-Aqsa is closed, you could very easily go up to the Mount with a video camera to show everyone that the mosque isn’t closed. Why haven’t you done that?”

Bennett paraphrased England’s wartime Prime Minister Winston Churchill, saying that if Israel chooses disgrace, we will get war. But, if we choose strength we will get security.

“Blood is being spilled, and you are silent… Some MKs are praying for an escalation,” Bennett said.

Speaking during deliberations on an unrelated bill to oversee after-school programs for children, Bennett dodged shouting interruptions from left-wing parliamentarians and criticized them for acting irresponsibly by not supporting the war on terror without reservation. He called on law enforcement to withdraw privileges from Hamas prisoners in Israeli jails, and added a word to Turkish President Recep Tayyip Erdoğan, who has called for Muslims around the world to visit Jerusalem and the holy sites in protest at what he called Israel’s “disregard for the rule of law.”

“[Mr Erdoğan], I know you’ve got domestic political problems. Don’t try to solve them on our back,” Bennett said.

Tibi’s reply was not long in coming, and led to an even bigger explosion of shouting. Calling Bennett the “minister of disturbances,” Tibi said Bennett and Prime Minister Benjamin Netanyahu “flip-flop” past one-another in a competition to see who can adopt stronger right-wing positions and complained that the Arab community in Israel is a scapegoat. He accused Netanyahu and Bennett of leading “Israelis and Palestinians, Jews and Arabs towards the abyss.

“We are not holding the steering wheel here,” Tibi said. “You are.”

Like Bennett, Tibi’s address was at times drowned out by shouts from the plenum, led by MK Oded Forer (Yisrael Beitenu), who told Tibi to “go to Palestine” and “go to Syria”, to which Tibi responded in Arabic that he was here [in Israel] to stay.