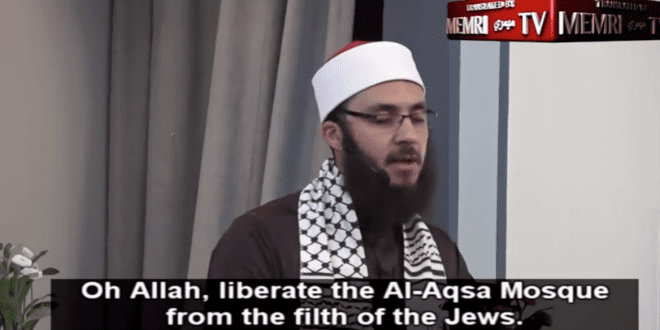 After a video surfaced of the imam of California mosque giving a sermon in which he called for for genocide against Jews everywhere in response to current turmoil on the Temple Mount, an influential Christian Zionist leader demanded that the US Department of Homeland Security immediately shut down his mosque, the Islamic Center of Davis (ICD).

“Imam Ammar Shahin is literally a ticking time-bomb that should not be permitted to hide behind a veil of ‘so-called’ religious freedom to promote genocide against Jews,” said Laurie Cardoza-Moore, President of Proclaiming Justice to The Nations (PJTN), a pro-Israel Christian group, in a statement.

“His form of Islamist-Fascism is a threat to the United States of America and the freedoms that we hold dear. It is only a matter of time before this man and his followers turn words into action. They must be stopped before innocent blood is spilled.”

In the video, translated by the Middle East Media Research Institute (MEMRI) and released on July 25, Imam Ammar asks that Allah punish Jews for placing security on the Temple Mount. “Oh Allah, support the al-Aqsa Mosque and the rest of the Muslim lands. Oh Allah, liberate al-Aqsa from the filth of the  Jews,” the imam prays. “Oh Allah, destroy those who closed the al-Aqsa Mosque.”

“Not only is Shahin a Hamas and Muslim Brotherhood sympathizer with a close affiliation to the North American Islamic Trust (NAIT) which the federal Government listed as an unindicted co-conspirator in the largest terrorist fundraising operation in the US, he is actively calling for Muslims to kill Jews anywhere they find them,” Cardoza-Moore charged.

“I am calling upon the Department of Homeland Security to immediately arrest this man and launch a full and thorough investigation to determine if ICD is a front for Jihad against America.”

PJTN was established to educate Christians about their Biblical responsibility to stand with their Jewish brethren and Israel, using media, grassroots campaigns, rallies and events to facilitate dialogue between the Christian and Jewish communities in support of the State of Israel and against global anti-Semitism.