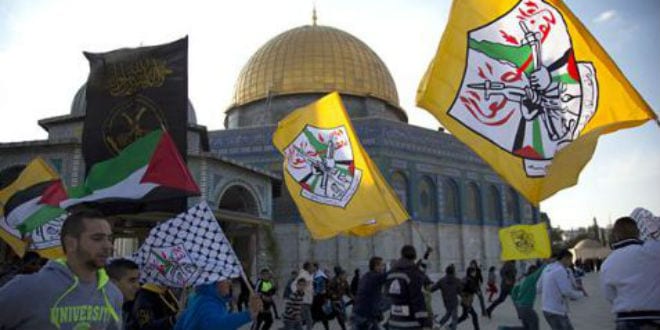 Walking behind a model of the al-Aqsa Mosque, thousands of Hamas gunmen marched in Gaza City Wednesday as the Islamic terror group’s leadership called for another day of rage Friday in the capital.

Palestinian Authority Chairman Mahmoud Abbas’s Fatah Party also called for its supporters to continue holding prayers outside the Temple Mount compound and to “escalate the struggle” for al-Aqsa.

Last Friday, July 21, four Palestinians were killed in clashes with security forces in a day of rage, one of them when an explosive device he was about to throw at Israeli troops blew up in his own hands.

Protesters and security forces have clashed around the Mount since Israel stationed metal detectors and security cameras around the entrances to the compound in response to the July 14 murder of two policeman by three Israeli-Arabs adjacent to the site.

The clashes resumed around the compound and in the streets of east Jerusalem Tuesday night, despite the dismantling of metal detectors and cameras overnight Monday.

Senior Hamas official Ahmed Bahar accused Israel of “trying to cheat the Palestinian people by removing metal detectors and putting in cameras instead (Israel’s security cabinet said smart cameras would be installed at the site in place of the metal detectors and video cameras).”

“The Palestinian resistance will continue to spearhead the defense of al-Aqsa,” Bahar said.

Fatah spokesman Osama al-Qawasmi said the struggle for al-Aqsa was at the core of the conflict.

“We will not accept partial or interim solutions, and we will continue our defense of the mosque,” Qawasmi said. Fatah, he added, was not prepared to bargain or negotiate and would only accept a return to the situation to what it was before July 14.

Qawasmi called on Hamas to form a national unity government “without hesitation or procrastination,” in response to the situation on Al-Aqsa and in Jerusalem.

Any attempt to delay national unity, Qawasmi added, would be a “direct involvement in the implementation of the Israeli plan.”

Also Wednesday, Turkish President Recep Tayyip Erdoğan repeated that Israel’s removal of metal detectors from the entrances to the Al-Aqsa mosque compound in Jerusalem’s Old City was not enough to settle Muslim fears about Israeli plans at the holy site.

“Israel’s step back from the metal detector implementation that offends Muslims is right but not enough,” Erdoğan said, and also urged Israel to abstain from policies that would throw the region into the “circle of fire.”