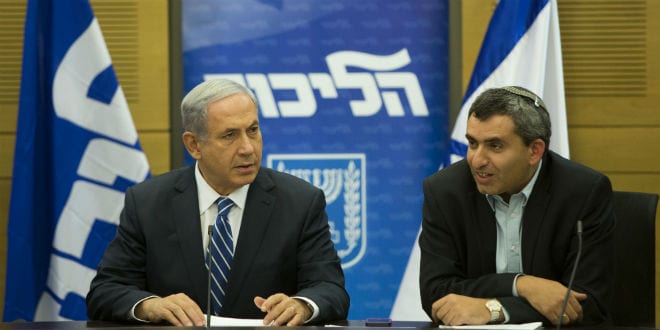 On Tuesday night, Minister Ze’ev Elkin, who is the head of the Likud politburo, passed a resolution opposing the establishment of a Palestinian state west of the Jordan River – ever.

The resolution passed by a vote of 33 to two, and calls on Likud officials to vigorously oppose political initiatives such as the ones being pushed by Saudi Arabia and France aimed at returning to the 1967 borders, uprooting settlements, dividing Jerusalem and returning refugees.

In Israeli right-wing politics this is known as putting a hoop on the prime minister: passing an extremely blunt resolution with a gigantic majority so that he has a hard time moving to the left.

Ze’ev Elkin, 46, is one of the natural candidates to replace the PM one of these days. Born in Kharkiv, in the Ukrainian, he made Aliyah in 1990. One of Likud’s observant politicians, he began his career in national politics as a Knesset member for Kadima, in 2006, shortly after the Gush Katif expulsion. He soon realized that Kadima was a sinking ship, what with then Prime Minister Ehud Olmert being dragged through the wringer on charges of corruption. He is considered one of the most intelligent members of the Knesset and the leader of the crowded right-wing corner of the Likud faction.

The resolution Elkin’s politburo passed Tuesday also calls for the use of levers on the Palestinian Authority in order to prevent its activity in international organizations such as UNESCO and the United Nations. There are many such levers, incidentally, seeing as the PA depends on Israel for, well, absolutely everything.

Elkin et al also call on the Netanyahu government to prepare for the collapse of the PA after Mahmoud Abbas’s death.

The Likud Central Committee is expected to convene soon to vote on an even tighter hoop for Netanyahu: more than 800 central committee members have endorsed a draft resolution supporting the application of Israeli law to Jewish settlement in Judea and Samaria and removing the shackles limiting Jewish construction there.