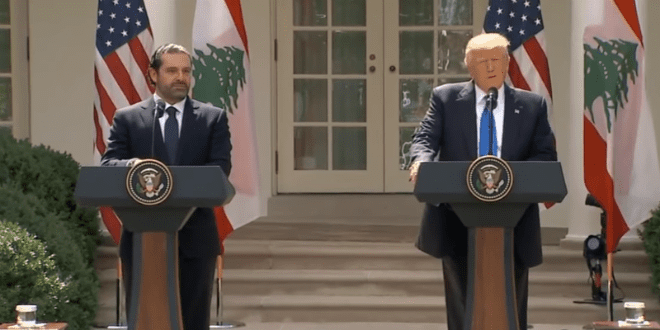 “Hezbollah is a menace to the Lebanese state, the Lebanese people and the entire region,” Trump said in a press conference with Hariri at the White House.

“The group continues to increase its military arsenal which threatens to start yet another conflict with Israel…With the support of Iran, the organization is also fueling humanitarian catastrophe in Syria,” he said, adding that Hezbollah’s “true interests are those of itself and its sponsor, Iran.”

Hariri’s late father, who also served as Lebanon’s prime minister, was assassinated by Hezbollah in 2005. The current Lebanese leader faces a precarious and delicate situation domestically, where Iranian-linked Hezbollah, which has refused to disarm since the end of the Lebanese civil war in 1990, is by far the most powerful actor within the country in terms of political and military strength.

While Hariri, a Sunni Muslim who leads an anti-Hezbollah political party, has been critical of the terror group, Hezbollah’s strong position within Lebanon essentially emasculates the government’s power.

At the same time, Lebanon is home to more than 1 million Syrian refugees, which has taken a toll on the country’s finances and political stability. Further, Lebanon faces threats from neighboring Syria such as the involvement of the Islamic State terror group in the Syrian Civil War.

Hariri is likely to request that Trump maintain U.S. military aid to Lebanon, which stands at about $80 million this year.