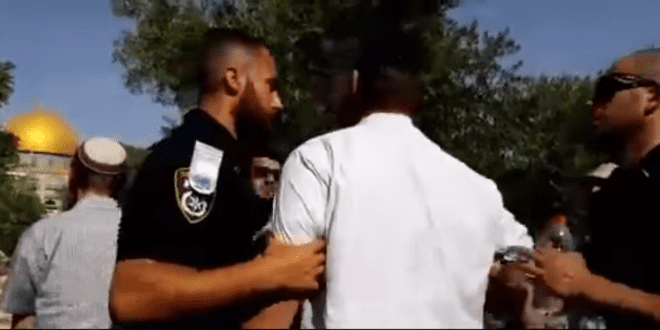 On Tuesday, a group of Jewish worshipers were forcibly silenced and detained on the Temple Mount in Jerusalem while leading a group in reciting the Kaddish prayer for three members of the Salomon family, murdered by a terrorist in their Samarian home over Shabbat.

“We went up to the Temple Mount because it is the place God’s presence is the most manifest on earth. And it was there that we wanted to say Kaddish in the merit of the three holy souls brutally slain in Halamish this past Shabbat – Yossi, Chaya, and Elad,” Ari Abramowitz of The Land of Israel Network told Breaking Israel News.

However, as soon as the worshipers began reciting the prayer, Israeli police officers approached, apprehended them and removed them from the Temple Mount, where the “status quo” holds that non-Muslims are not allowed to pray at the holiest Jewish site in the world.

Arab riots over Temple Mount sovereignty spread through Jerusalem last week after Israel installed metal detectors at the site’s Muslim entrances following a terror attack on the Mount which left two Israeli policemen dead on July 14. With Muslims boycotting the site in protest, Jews were allowed to ascend unmolested for the first time in 2,000 years.

However, after much international pressure, the government decided to remove the metal detectors and restore the so-called “status quo” to the Mount.

“I’m arrested for praying for peace and they indiscriminately murder and don’t have basic metal detectors that we have going into the Kotel (Western Wall)?” Abramowitz, a Jewish educator and advocate, asked. “Why are we surrendering to their bullying and coercion?”

He called the battle for freedom of prayer on the Temple Mount “the greatest civil rights struggle of our generation”, adding that Jewish prayer at the holy site is so powerful that Muslims see it as a direct spiritual threat.

“The Arab world is wise for not wanting us to pray on the Temple Mount – they are a spiritual people and they know nothing damages their cause more than Jewish prayer on the most spiritually potent real estate in the universe.”