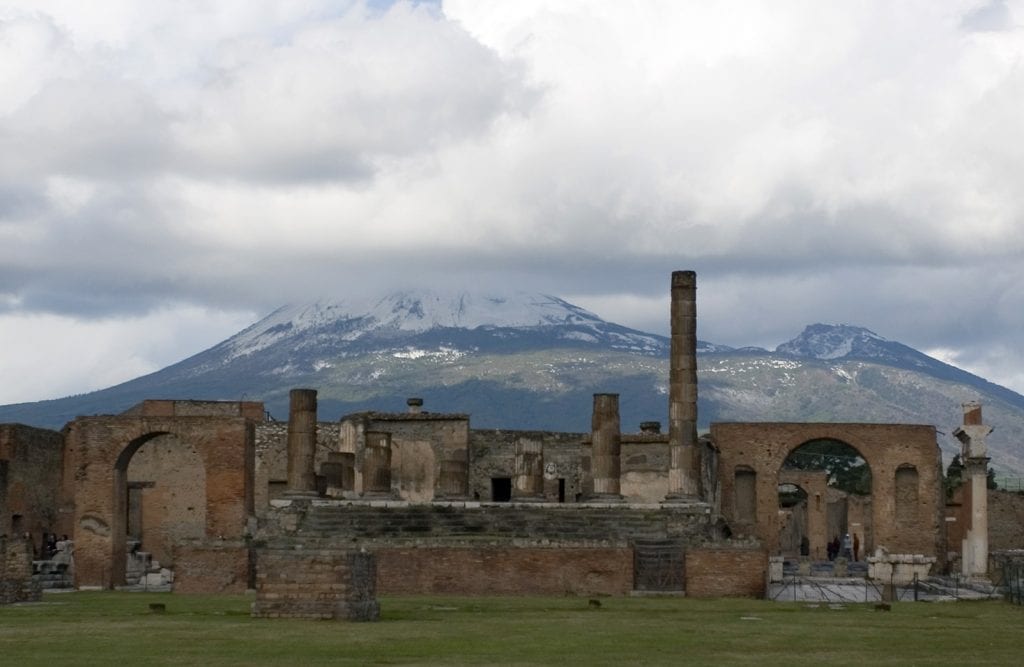 The recent confluence of a global rash of epic natural disasters and rapidly rising tensions surrounding the Temple Mount echoes events from 2,000 years ago, when the destruction of the Temple preceded a catastrophic volcanic eruption in a distant section of the world.

On Sunday, 25,000 people were evacuated from their homes in northeast Japan as a level eight typhoon caused massive flooding. Over the weekend, eight tropical cyclones simultaneously churned through the North Pacific, something that hasn’t happened in more than four decades. This followed a freak storm that hit Japan with no warning last Tuesday, pelting the Ikebukuro area with hailstones.

Not to be outdone by the heavens above, the earth made itself known by rocking and rolling in several separate locations. On Friday, a magnitude 6.5 earthquake hit Greece and Turkey, killing 2 people and injuring over 300.

On the other side of the globe, the Long Valley Caldera in California’s Eastern Sierra was hit over the weekend by a swarm of earthquakes. More than 150 earthquakes have been detected there since the start of this month.The US Geological Survey designated Long Valley Caldera’s threat potential as “very high”.

The sudden onset of these natural phenomena may be spiritually connected to the recent upheaval surrounding the Temple Mount in Jerusalem, Rabbi Avraham Arieh Trugman, director of Ohr Chadash, told Breaking Israel News.

Arabs have been rioting for a week through the streets of Jerusalem, Judea and Samaria to protest the installation of metal detectors at the entrances to the Temple Mount following a terror attack on July 14 in which three Palestinian terrorists murdered two Israeli police officers near the Mount. The incident led to a dramatic increase in tension between Israelis, Palestinians and Jordanians.

Rabbi Trugman cited the case of the Roman Emperor Titus as a compelling precedent for how events harming the Jewish people have tempted the fury of the heavens.

As the Roman military commander in Judea, Titus ordered the Holy Temple in Jerusalem to be burned to the ground on the Ninth of Av, 70 CE. When he became emperor nine years later, Mount Vesuvius erupted, destroying the thriving Roman city of Pompeii. The catastrophic event took place in the same month as the destruction of the Temple.

“The Talmud clearly designated Titus as suffering for his sins against the Temple in a way that brought destruction into the world,” Rabbi Trugman said, calling it a “spiritual butterfly effect.”

The butterfly effect is a concept holding that  small events can have large and unanticipated aftereffects in seemingly distant and disconnected contexts. It was originally proposed by  meteorologist and pioneer of chaos theory Edward Lorenz to explain how a distant butterfly flapping its wings could influence or even lead to the creation of a tornado.

“That is really true because everything is one, and God is one,” said Rabbi Trugman, though he cautioned, “There is most certainly a connection between natural events and spiritual causes, but it borders on dangerous to give reasons for natural disasters.

“Understanding the cause and effect must be done with a great deal of humility since there is only so much we can know.”

Rabbi Yosef Berger, the rabbi of the Tomb of King David on Mount Zion, agreed there is a connection between the events in Israel and global natural catastrophes.

“If lies and evil are permitted to flourish in Israel, this will certainly affect other parts of the world in a negative manner,” he told Breaking Israel News.

“As we move closer to geula (redemption) this will become even more so,” Rabbi Berger warned.