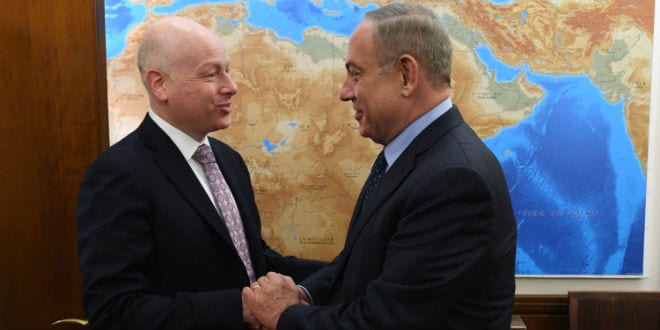 Jason Greenblatt, US President Donald Trump’s special representative for international negotiations, will arrive in Israel Monday in an attempt to ramp down tensions between Israel, the Palestinian Authority and Jordan over the Temple Mount. US officials said that Greenblatt’s schedule has not yet been finalized, but will likely include meetings with Prime Minister Benjamn Netanyahu, Palestinian Authority Chairman Mahmoud Abbas, Waqf (Islamic trust) officials charged with overseeing the Temple Mount and possibly Jordanian officials.

White House officials said the United States is “very concerned” about tensions surrounding the Temple Mount and stressed the sanctity of the site to Jews, Muslims, and Christians. In a statement, officials called on the State of Israel and the Hashemite Kingdom of Jordan “to make a good faith effort to reduce tensions and to find a solution that assures public safety and the security of the site and maintains the status quo.

“The United States will continue to closely monitor the developments,” the statement said.

But the Trump administration and the State Department have both avoided commenting on the placement of metal detectors at entrances to the Mount following a July 14 terror attack in which Israeli Arab citizens shot dead two Israeli police officers on duty adjacent to the site.

Last Thursday, State Department Spokeswoman Heather Nauert said the department “support the status quo and we welcome all sides continuing their commitment to maintaining the status quo,” but refused to say whether the US feels that enhanced security measures are a violation of preexisting norms at the site.

In addition, the so-called Middle East Quartet, consisting of Russia, the United States, the European Union and the United Nations said the group is “deeply concerned by the escalating tensions and violent clashes taking place in and around the Old City of Jerusalem” and “strongly condemn(ed) acts of terror, express(ed) their regret for all loss of innocent life caused by the violence, and hope(ed) for a speedy recovery to the wounded.”

The Quartet Envoys called on all sides “to demonstrate maximum restraint, refrain from provocative actions and work towards de-escalating the situation” and praised Prime Minister Netanyahu for saying that the status quo at the holy sites in Jerusalem will be upheld and respected.