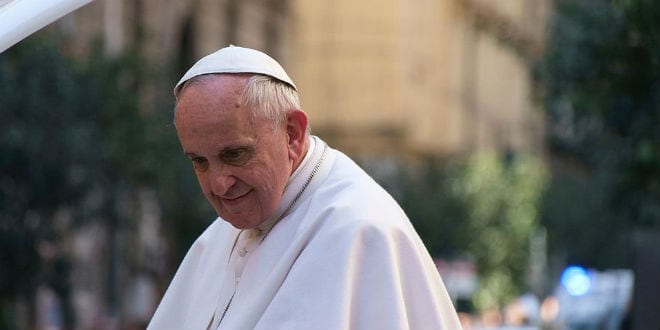 Amid the intensifying battles surrounding the Temple Mount, the Catholic Church expressed its concerns in terms that placed the blame entirely on Israel while referring to the site exclusively by its Muslim name. One bishop stated in an interview on Vatican Radio that there has, in fact, been no Palestinian violence.

On Sunday, Pope Francis addressed the crowd gathered in the Vatican’s St. Peter’s Square, telling them that he viewed “with trepidation the grave tensions and violence” surrounding the Temple Mount in Jerusalem.

“I feel the need to express a distressed appeal for moderation and dialogue,” the Pope said, calling on the people to pray for the sake of Jerusalem.

The violence the Pope is referring to began ten days ago when three Palestinian terrorists murdered two Druze Israeli policemen while they guarded the entrance to the Temple Mount. The Israeli police entered the site and, after a gunbattle, killed the three terrorists.

The Israeli government closed the site to all visitors until Sunday, when it reopened to Muslims with increased security measures that included walk-through metal detectors. The Islamic Waqf, the Muslim trust which controls the Temple Mount, called for a boycott of the site. Muslim crowds rioted last week and three Palestinians were killed in clashes with Israeli police.

On Friday night, a Palestinian, citing the situation at the Temple Mount as his motivation, entered the town of Halamish. There, he murdered a 70-year-old grandfather and his middle-aged son and daughter while they sat at their Sabbath table. He also seriously wounded the 68-year-old grandmother.

In the wake of the growing violence, the Latin Patriarchate of Jerusalem released a statement. Signed by the heads of all 13 Christian communities in Jerusalem, it condemned the recent escalation of violence at the Temple Mount, but did so in language that clearly favored the Palestinians and condemned Israel. The statement referred to the site by its Arabic names, disregarding any Jewish or Christian connection to the site.

“We, the Heads of Churches in Jerusalem, express our serious concern regarding recent escalation in violent developments around Haram ash-Sharif and our grief for the loss of human life and strongly condemn any act of violence,” the statement read.

The statement said that the violence was due solely to a change in the status quo, i.e. placing metal detectors at the entrances to the Temple Mount.

“We are worried about any change to historical (Status Quo) situation in al-Aqsa Mosque (Haram ash-Sharif) and its courtyard, and in the holy city of Jerusalem. Any threat to its continuity and integrity could easily lead to serious and unpredictable consequences, which would be most unwelcome in the present tense religious climate.

“We value the continued custody of the Hashemite Kingdom of Jordan on Al-Aqsa Mosque and the holy places in Jerusalem and the Holy Land which guarantees the right for all Muslims to free access and worship to al Aqsa Mosque according to the prevailing Status Quo.

“We renew our call that the historical Status Quo governing these sites be fully respected, for the sake of peace and reconciliation to the whole community, and we pray for a just and lasting peace in the whole region and all its peoples.”

The statement made no mention of the Muslim terror attack that led to Israel placing the metal detectors at the entrances to the site. Nor did it refer to the horrific Palestinian terror attack on Friday.

Bishop Munib Younan, head of the Evangelical Lutheran Church of Jordan and the Holy Land, said on Vatican radio that the metal detectors are a form of “collective punishment” which should not be permitted “because of an attack by two persons.”

The bishop claimed that thousands of Muslims pray at the site during Ramadan and “everything goes smoothly”. He did not mention the murder of IDF Border Policewoman Hadas Malkah, which took place during Ramadan.

“It’s essential to find a political solution to end the Israeli occupation, which is considered illegal,” the bishop concluded.