Will Shabbat Massacre Usher in Final War for Third Temple? 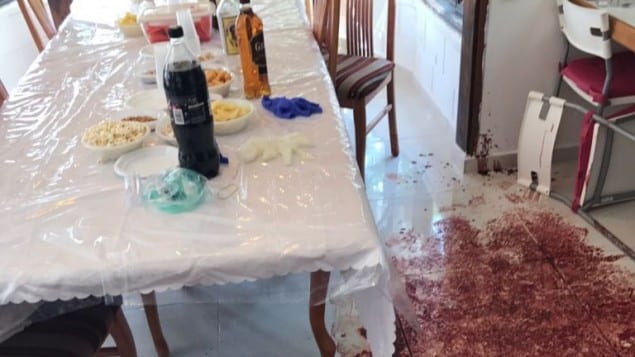 The horrific murder of three family members on Friday night signaled a painful upsurge in the battle for the Temple Mount indicated that the recent struggle is part of the archetypal end-of-days battle between good and evil that could bring the Third Temple.

In a bloody and brutal attack, a Palestinian terrorist entered the house of a family as they sat down to their Sabbath meal on Friday and murdered a grandfather and two of his children. The motive the terrorist cited on the Facebook post announcing his intentions was to avenge the placing of metal detectors on the Temple Mount.

“With the murder this Shabbat, we see that everything is coming down to the Temple Mount,” Rabbi Katz told Breaking Israel News. “In these final days before Moshiach (Messiah), we need to have clarity about this.”

Rabbi Katz sees this tumultuous time as an opportunity for Israel to move forward towards the Third Temple.

“The Temple Mount was in our hands and we gave it away. We have another chance now to say to the world that this is God’s house,” the rabbi said. “That is what the struggle is about, and has always been about.”

The rabbi stated that the real struggle for the Third Temple “begins in our hearts.”

“The Temple service can only be done in joy, and there is no joy like dispelling doubt,” he said. “We are arguing about things, like the murder of a family, like the Temple Mount, things that there really should be no doubt at all in anyone’s minds, especially ours. Only when we have no doubt will we be ready for the Temple.”

This heinous act comes at the end of the three-week period of austerity leading up to the fast day on the Ninth day of Av, a holiday commemorating the destruction of the two Temples. In two days, all of Israel will be mourning the Temple as the memory of the Salomon family rests heavily on the hearts of the Jewish people.

But there is a powerfully Phoenix-like aspect to the holiday. Though the sad day is a reminder of great loss, the Talmud (Brachot 2:4) teaches that the Messiah will be born on the Ninth day of Av. This renewal of the Temple coming from its own destruction is referred to explicitly by the Prophet Zechariah.

According to Jewish tradition, the arrival of the Messiah will be necessarily be preceded by pains, similar to the pangs of a woman giving birth, as referred to by the prophet Isaiah.

Like a woman with child Approaching childbirth, Writhing and screaming in her pangs, So are we become because of You, Hashem. Isaiah 27:16

The Yalkut Shimoni, a compilation of rabbinic commentary on the Bible believed to have been composed in the 13th century, said these pains would be caused by conflict between nations.

The year in which Melech Hamashiach will be revealed, all the nations of the world will be provoking each other…The king of Persia (Iran) will provoke the King of Arabia. The King of Arabia, will go to Edom (the leader of the Christian nations) to take counsel and the King of Persia (Ahmadinejad) will threaten to destroy the entire world. The nations of the world will be outraged and panic. They will fall on their faces and will experience pains like birth pangs. Israel too, will be outraged and in a state of panic ask, “Where do we go?” Yalkut Shimoni

Moshe Feiglin, a right-wing political figure and former member of Knesset, warned that this current conflict could evolve into a final battle for Israel’s very existence.

“They killed two policemen and then they killed a family,” Moshe Feiglin said. “This is all because for fifty years we have said the Temple Mount is theirs and not ours. If the beating heart of the Holy Land belongs to them, then it all belongs to them.

“If we give in now, we will bring down the final, most destructive war.”