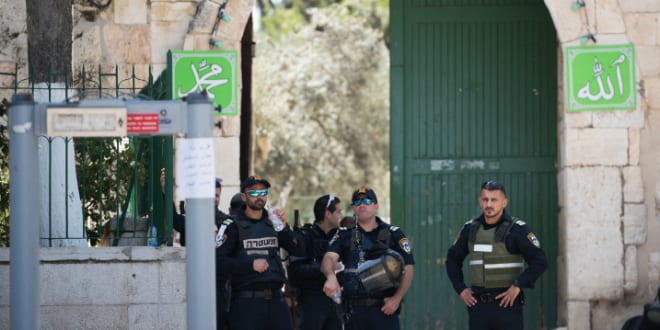 Israel media reported that Abbas warned Kushner that tensions over the holy site were a serious concern, and threatened to get out of control if Israel did not back down and remove the metal detectors.

Abbas has turned to other nations to pressure Israel into removing the security measures. The Palestinian president contacted Turkey’s Recep Tayyip Erdogan, requested that he intercede with the United States and Israel to make Israel remove the metal detectors from the entrances to the Temple Mount.

Abbas has also turned to Arab countries and a United Nations committee in the region to pressure Israel into removing the security measures from the Temple Mount.

Palestinian Authority spokesman Yousif al-Mahmoud called on the international community to uphold the recent UNESCO resolutions declaring the Jewish presence in Jerusalem to be illegal.

Hamas has called for a day of rage on Friday in which Palestinians hold violent riots.

The situation began last Friday when three Palestinians exited the Temple Mount armed with submachine guns, killing a Druze Israeli policeman. A second Druze policeman followed the terrorists onto the Temple Mount where they killed him. Israeli security forces entered the Temple Mount and after a firefight, succeeded in killing all three terrorists.
After the attack, Prime Minister Benjamin Netanyahu closed the Temple Mount to Muslims, the first time this has been done since 1989. Jews were also prevented from entering the site.
On Sunday, the site was opened with increased security measures that included security cameras and walk-through metal detectors. Until this time, Arabs were not required to pass through any form of security check when entering the site. Metal detectors are required for Jews at the Temple Mount, the Western Wall, and most other public places.
Jerusalem Mufti  Muhammad Ahmad Hussein demanded the metal detectors be removed, calling them “Israeli aggression”. He called for a Muslim boycott of the site and Palestinian strongmen enforced this self-imposed ban. The Temple Mount is officially under the custodianship of Jordan, Hussein was appointed by Abbas and has publicly advocated bombing as an acceptable tactic against Israel.
A complaint has been filed in the Israeli courts against Hussein, claiming that at a speech to a large crowd at the Lions Gate on Thursday, he told them that “Al-Aqsa is worth more than [the Jews’] blood and is more valuable than their souls.”