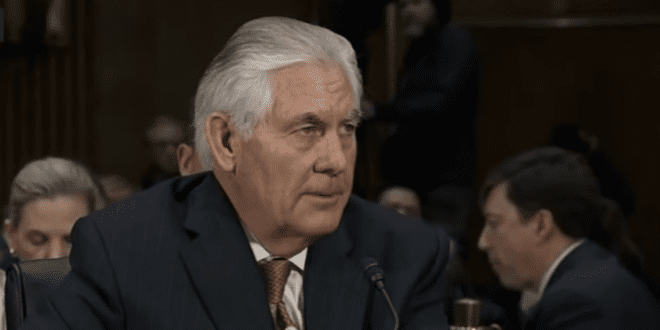 In its annual report on terrorism, the US State Department blamed Palestinian violence on Israel, using language even more anti-Israel than was used in last year’s report submitted by Obama’s Secretary of State, John Kerry.

On Wednesday, Secretary of State Rex Tillerson submitted the annual “Country Reports on Terrorism” to Congress. The section dealing with Israel began well, referring to Israel as “a committed counterterrorism partner” and recognizing Israel’s many threats.

But when it came to citing the cause of Palestinian violence, the report placed the blame entirely on Israel.

“Last year’s report under Obama said the Palestinians argued that terrorism is sometimes caused by frustration over ‘occupation’,” the Conservative Review reported. “But that report was much less accusatory because it makes clear that the position is reflecting the views of Palestinian officials, and not the U.S. government.”

The State Department’s report went on to list the many threats and some of the actual attacks from the past year. The report praised the Palestinian Authority (PA) for its, “continued… counterterrorism efforts in the West Bank”. The report noted US assistance in training the Palestinians in these efforts.

PA President Mahmoud Abbas was praised for “his commitment to nonviolence, recognition of the State of Israel, and pursuit of an independent Palestinian state through peaceful means.”

Many watchdog groups contest this claim. Palestinian Media Watch (PMW) reported many cases in which Abbas not only incited or called for violence but actual instances in which he has publicly admitted sending terrorists to kill Israelis.

The State Department report then stated that the PA efforts led to a decrease in terror attacks in Israel but the report did not cite statistics. The report appears to be erroneous since there was, in fact, a significant increase in both numbers of attacks and in casualties. In 2015, 108 terror attacks resulted in 83 killed and 251 wounded. In 2016, 122 attacks resulted in 90 dead and 381 wounded.