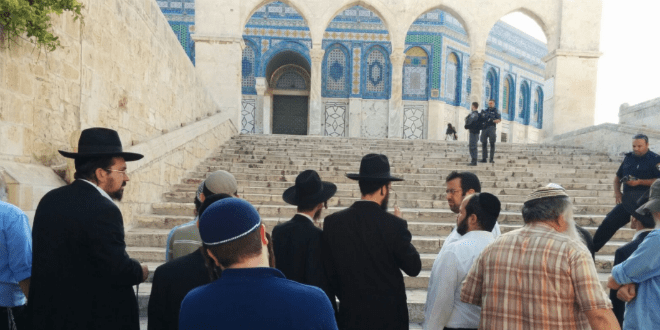 A number of Israeli Jews were able to pray freely on the Temple Mount Monday after a bizarre sequence of events which resulted in Muslims boycotting the site.

The Jews ascending the Temple Mount were unattended by Muslim guards for the first time in decades. Some could not resist the temptation to pray, and in a poignant display of piety, the first prayers were for the non-Jewish policemen who fell protecting the Jewish people during last Friday’s terror attack at the site.

On Friday morning, three Palestinians opened fire near the Temple Mount, killing two Druze Israeli Policemen and injuring two others before they were killed by Israeli forces on the Mount itself. In the aftermath of the attack, the Israeli government closed the Temple Mount to Muslim prayer for the first time since 1999. The site was also closed to Jews.

Prime Minister Benjamin Netanyahu ordered the Temple Mount reopened on Sunday with increased security measures which included requiring Muslim visitors to pass through metal detectors. (While Jews who visit the site have always been subjected to strict security checks, including metal detectors, Muslims have never, until  now, had to undergo the same scrutiny.)

The Waqf (Jordanian Islamic authority) immediately called on Muslims to boycott the site, calling the metal detectors “Israeli aggression”. Inter-Islamic scuffles broke out as some Palestinians attempted to prevent others from entering the Temple Mount compound. Dozens of Muslims prayed at the entrances to the compound, kneeling in prayer towards the IDF guards in a scene that seemed to be the sudden materialization of prophecy.

And the sons of them that afflicted thee shall come bending unto thee, and all they that despised thee shall bow down at the soles of thy feet; and they shall call thee the city of Hashem, the Tzion of the Holy One of Yisrael. Isaiah 60:14

On Monday, Jews were finally permitted to visit the site. Due to the Waqf strike, they were able to walk on the Temple Mount without an antagonistic Muslim guard in attendance to ensure they would not pray. The site was also largely free of Muslim worshipers observing the Waqf’s boycott.

Several visitors took advantage of the rare opportunity to connect with God on the holiest site in the world. In a touching scene, several Jews said Kaddish, the mourner’s prayer, at the site where one of the two policemen were killed.

This opportunity for Jews to pray on the Temple Mount did not come as a result of Jewish demand, but as a result of Muslim action. Rabbi Shalom Mashash, former chief rabbi of Haifa, taught that Temple will be built when the Arabs beg Jews to build it. As unlikely as this may seem today, today’s Jewish prayer is evidence that when it comes to matters concerning the Temple, anything is possible and the improbable is commonplace.