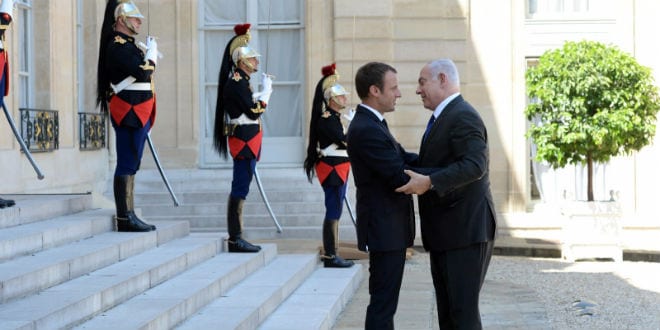 “Anti-Zionism is a reinvented form of anti-Semitism,” French president Emmanuel Macron said Sunday at a ceremony in Paris marking the 75th anniversary of the infamous Vel d’Hiv roundup.

Macron also reaffirmed France’s historic responsibility for one of the darkest chapters in the country’s history in which over 13,000 French Jews were sent to Auschwitz.

“It is indeed France that organized the roundup and the deportation…. not a single German took part,”  Macron said in the presence in the presence of Binyamin Netanyahu, the first Israeli prime minister ever to participate in the annual memorial ceremony.

During the French presidential elections earlier this year,  National Front leader Marine Le Pen said it was not France that was responsible for the roundup, but rather “those who were in power at the time.”

Turning to the battle against radical Islam, Netanyahu said that extremist forces wanted to destroy not only the Jews and the Jewish state as well, but “anyone that stands in their way.”

“Militant Islam wants to destroy our common civilization,” Netanyahu told the French president. “The militant Shiites led by Iran, the militant Sunnis led by ISIS – both seek to vanquish us. They seek to destroy Europe.”

Israel, Netanyahu said is merely the first Western target that stands in their way. “Militant Islamists do not hate the West because of Israel,” he said. “To the contrary, they hate Israel because of the West, because they rightly see in Israel a forward bastion of our common values of freedom, humanism, democracy. They try to destroy us, but also they try to destroy you.”

Netanyahu and Macron were due to hold face to face talks at the Élysée Palace, where French media said they would discuss Syria, Iran and the Israeli-Palestinian conflict.