Mayim Bialik Campaigns for SodaStream on Behalf of ‘Homoschlepiens’

Home » Mayim Bialik Campaigns for SodaStream on Behalf of ‘Homoschlepiens’ 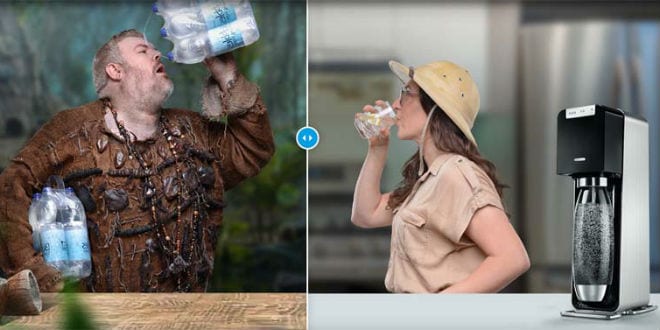 SodaStream has launched a new video featuring The Big Bang Theory star Mayim Bialik (Dr. Amy Farrah Fowler), and Game of Thrones star Kristian Nairn (just Hodor), to spread the word about the ecological advantages of making soda in a repeated-use bottle in your home, over ‘schlepping’ (carrying) plastic bottles from the market which then devastates Mother Earth with billions of tons of plastic trash.

The new commercial features Bialik as a futuristic anthropologist, telling a group of children about her first encounter with a Homoschlepien, whose primitive society still relies on plastic bottles.

Bialik said in statement: “This campaign has a powerful message and one that needed to be told before I went on vocal rest [for medical reasons]. More than one billion plastic beverage bottles are used each day around the world, the majority of which end up in our landfills, parks and oceans devastating the environment and killing marine animals. Who will speak for them and say enough is enough? I may have temporarily lost my voice, but I won’t be silenced about this important message, the world needs to find their voice and say ‘no’ to polluting plastic bottles.”

Anti-Israel activists advocate a consumer boycott of SodaStream, because the company’s main plant was in an Israeli industrial zone outside Maaleh Adumim in Judea. The company has since closed that plant.

“SodaStream recently struggled to secure working permits for its Palestinian workers in an effort to bridge religious and political conflicts and improve lives where they can,” Bialik told Fox News. “This is admirable and while it may not solve the entire Middle East situation, it is a gesture of solidarity and respect that is needed in so many places in this world.”

“As so many people in Israel know, people from different religions, ethnicities and nationalities can work together in peace and harmony despite what the media wants us to believe. Individuals and corporations can show that we are stronger together: women, men, children, lovers of peace, and lovers of freedom and justice,” Bialik said.

The actress announced in June that she had sprained her vocal cords and her doctor has put her on vocal rest for 30 days.