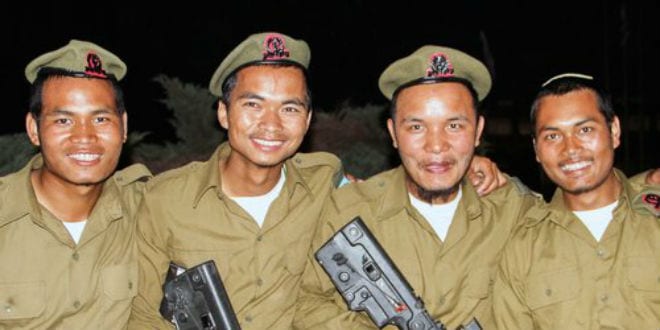 Six members of a “lost” Jewish tribe from India, the Bnei Menashe, will serve together in the same IDF combat unit. All six soldiers immigrated to Israel within the last two years.

“I grew up in the state of Manipur in India, and in 2015 I was allowed to immigrate to Israel with all the members of my family—except for my older brother and his family, who remained in India,” Tungnung said at his IDF swearing-in ceremony.

“Three months ago I joined the IDF and was happy to discover that I was serving in the same unit with five friends. My family’s dream was always to immigrate to Israel and build our future there, and my private dream was always to serve as a soldier in the IDF,” he said.

The soldiers recently made aliyah with the help of Shavei Israel, a Jerusalem-based nonprofit that calls itself “the only Jewish organization today that is actively reaching out to ‘lost Jews’ in an effort to facilitate their return [to Israel].”

Members of the Bnei Menashe community claim to descend from Jews hailing from the tribe of Manasseh who were banished from ancient Israel to India in the 8th century B.C. In 2005, then-Sephardic Chief Rabbi of Israel Shlomo Amar officially recognized the Bnei Menashe as a “lost” tribe. Since then, some 3,000 Bnei Menashe have made aliyah, and 7,000 remain in India.

“More than 2,700 years after their ancestors were exiled from the Land of Israel, the Bnei Menashe are returning home and proving time and again that they have a strong desire to integrate into Israeli society and make a real contribution to the state,” said Michael Freund, founder and chairman of Shavei Israel.