Rwanda is Open for Business With Israel

Home » Rwanda is Open for Business With Israel 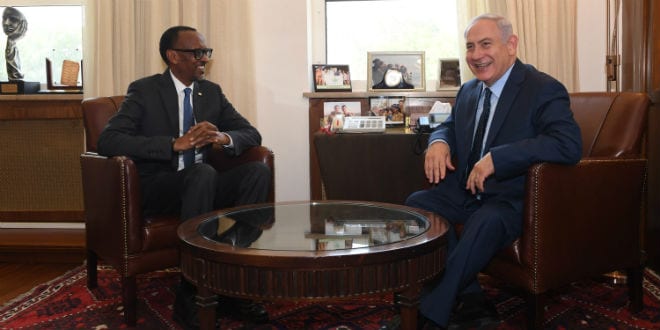 “Cooperation between our countries has blossomed in many areas among them technology, agriculture, and energy, as well as security. We appreciate what Israel has to offer in these and other fields, and we are very happy to be working with you,” Kagame said.

“Rwanda is open for business and we look forward to welcoming private sector delegations from Israel even more frequently in the future, Kagame added at a press conference with Netanyahu and Rivlin. “Ever since the Prime Minister’s visit to west Africa last year, Israel has continued to follow through on its commitments and objective of scaling up engagement across Africa this is a very positive trend which can only be welcomed and merits our support.”

Netanyahu, who has made relations with Africa one of his top foreign policy agendas, said Rwanda had been instrumental in helping Israel’s push into the continent.

“I would say you were the indispensable bridge on which we marched to make our return to Africa, step by step, with very sound advice, very, very wise counsel,” Netanyahu said.  “I want to thank you Paul for helping Israel, helping Israel and Africa, helping Israel in general,” he added.

Following up on statements during a recent visit to West Africa that it was time for African countries burgeoning relations with Israel to be reflected in international fora, Netanyahu said Rwanda and Kagame had already taken that step.

“We see how you stand up for Israel in international forums, and you already expressed a simple principle that we did, which is that bilateral relationships should be reflected in multilateral forums,” the prime minister said.

Referring to last week’s vote at UNESCO denouncing Israel’s presence in the Old City of Jerusalem as illegal and also registering the Tomb of the Patriarchs as a Palestinian heritage site, Netanyahu told Kagame there was still a “dissonance between us and a few other nations.”

Kagame and Netanyahu later held a working meeting where they discussed the deepening of bilateral cooperation in various fields.