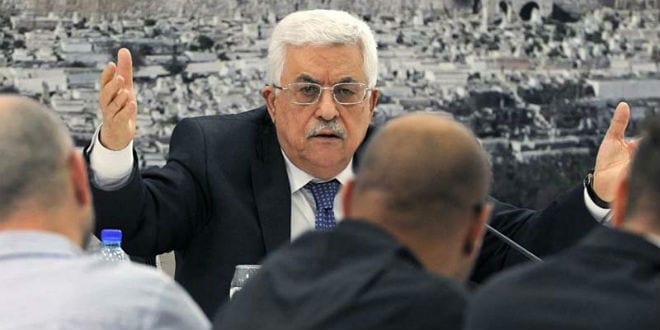 Palestinian Authority Chairman Mahmoud Abbas has threatened to impose immediate financial sanctions on Hamas in the Gaza Strip to force it to back down from what he called its “coup,” Safa reported.

Speaking at the end of his visit to Tunisia on Saturday, Abbas said that he would work to achieve national unity and end the division as one of the requirements of the establishment of a Palestinian State, despite Hamas’ attempts to derail the process.

“We will not punish our people in the Gaza Strip, but Hamas leaders in Gaza should know that we may resort to immediate financial sanctions if they insist on a coup against the institutions of the Palestinian State in Ramallah and contribute to the division of the people Palestinian conflict into cantons and small, fragmented and rebellious entities,” Abbas warned.

In reality, Abbas has been punishing the people of Gaza plenty, by freezing payments to both Israel and Egypt for energy supplies. With Abbas’ insistence, Gaza residents are now down to a maximum of three-hour electric service daily.

The PA Chairman stressed that the leadership in Ramallah had decided after his talks in Cairo to impose financial sanctions on the Hamas leadership in Gaza. He considers such sanctions as justified, as part of his ongoing efforts to reach a two-state solution through the good services of President Donald Trump “within a year.”

Abbas explained that he and Egyptian President Abdel Fattah al-Sisi have been working on proposals, recommendations and developments to bring about a Palestinian State now, and would not allow Hamas to ruin this cooperation.

“The Hamas leadership in Gaza surprised us about three months ago by announcing the formation of a new government unilaterally, a move we considered provocative and dedicated to perpetuating their coup and division,” Abbas stated.