VIDEO: Behind the Scenes With Gaza’s Best Propaganda Make-Up Artist 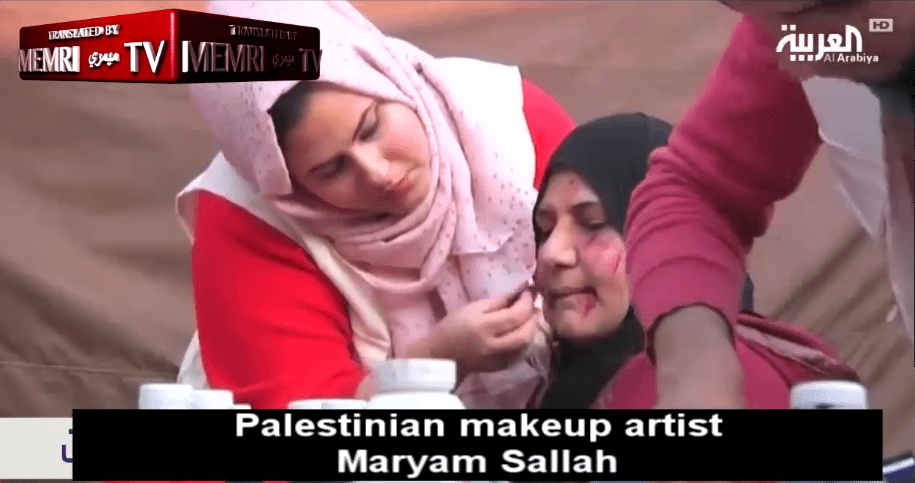 Can humanitarian organizations claim to be unbiased while staging made-for-the-camera Israeli attacks for propaganda use? Médecins du Monde, a French non-governmental organization (NGO), did exactly that, using a Gazan makeup artist to give gruesome war wounds to Palestinian “victims.”

In February, Al-Arabiya TV, a Saudi-owned pan-Arab television news channel, broadcast an interview with Palestinian makeup artist Maryam Sallah, who used her skills to create a disaster scenarios full of blood and gore in the streets of Rafah in Gaza.

“This is a drill by the French Médecins du Monde association,” Sallah explained. “They treat wounds, and we use cinematic makeup to imitate these wounds.”

The interviewer openly admitted the video was for propaganda purposes.

“The goal of the film is to raise awareness of the physical perils facing the people of Gaza,” she stated unabashedly.

“There is no cinema in Gaza,” the make-up artist lamented. “This is the number one difficulty. There is very little to do in my line of work.”

The Middle East Media Research Institute (MEMRI), a nonprofit press monitoring and analysis organization, would probably dispute Sallah’s claim. They reported on this video, and are generally kept very busy monitoring propaganda like this.

Referred to sarcastically as ‘Pallywood’, the Palestinian propaganda industry has frequently been caught fabricating or altering videos and photographs that falsely paint Israelis and IDF soldiers as cruel, violent abusers.

Journalist Ruthie Blum describes ‘Pallywood’ as referring to “productions staged by the Palestinians, in front of (and often with cooperation from) Western camera crews, for the purpose of promoting anti-Israel propaganda by disguising it as news.”

Despite claiming to be a humanitarian organization, making videos of fictitious Israeli offenses is business-as-usual for Médecins du Monde. The NGO has been criticized in the past for pursuing a biased anti-Israel agenda and creating baseless reports under the guise of medicine. The BMJ,  one of the oldest peer-reviewed medical journals in the world, discounted reports by Médecins du Monde about Israeli offenses.

“The activities of Medecins du Monde, partnered with Physicians for Human Rights-Israel, is a clear abuse of medical issues and human rights,” the journal read. “This politicization deserves no place in the pages of a respected publication.”

It would seem their videos also push the limits of credibility.