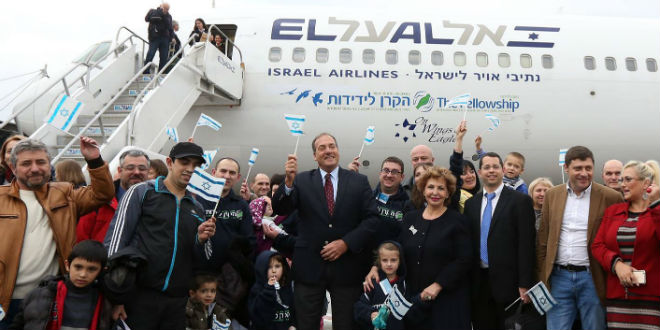 This week jumpstarts a massive summer marathon of aliyah (immigration) flights sponsored by the International Fellowship of Christians and Jews (The Fellowship), which will bring 2,300 olim (new immigrants) from 15 countries to Israel within the next three months.

In just this week alone, 382 olim from six countries will arrive in Israel on flights with The Fellowship, in what will be a 12-week series of airlifts bringing some 2,300 olim to Israel throughout the upcoming summer months. This will bring the total number of olim The Fellowship has gathered to Israel so far in 2017 to 3,900.

Over 5,000 olim are expected to immigrate to Israel with The Fellowship by the end of this year. The immigrants hail from 15 countries where the Fellowship is active, including Azerbaijan, Belarus, Belgium, Brazil, Georgia, Latvia, Moldova, Russia, Spain, Turkey, Uruguay, Venezuela, and a Muslim country in the Middle East, which could not be identified for security reasons.

Over the past three years, The Fellowship’s aliyah program has flourished, and in 2016 The Fellowship tripled the number of olim it brought to Israel, taking in more than 4,500 olim from 24 countries and becoming an increasingly key force in overall aliyah to Israel.

The Fellowship focuses its aliyah efforts on Jews in the mid-lower socioeconomic range who need greater help and financial support, as well as Jews who suffer from security threats rooted in terror or anti-Semitism in their native countries.

Fellowship field staff reports, for example, that French Jews tend to come on aliyah because of the rampant anti-Semitism in the streets and the deep-seated desire to give their children a chance for a happier and safer future. Ukrainian olim, on the other hand, are motivated mostly by the crumbling national economy and challenges of joining the workforce after the serious depression that followed the war with Russia that has also created thousands of Jewish refugees in that country. Venezuelan Jews endure both these factors and also seek a better, brighter future in Israel.

In order to give the olim a positive absorption experience, The Fellowship carries out a variety of programs. For example, each immigrant is met at the airport, receives a generous package of financial and social benefits that are custom-designed for their family’s needs. These include free airline tickets and an $800 grant per adult and $400 grant per child up to age 16, and much more.

Additionally, The Fellowship escorts the olim throughout the process, beginning with pre-immigration learning sessions and registration and culminating with vital services such as job placement, school registration, housing, and many other additions, including scholarships for the children to attend summer camp.

“Aliyah has always been and is still a critical factor in Israeli society,” says The Fellowship’s founder and president, Rabbi Yechiel Eckstein. “Most new olim who arrive in Israel are young, educated careerists whose professions and skills are keys to stimulating the economic growth and viability of the country. I am pleased to see more and more Jews choosing to come to Israel with The Fellowship, and I wish all the olim an enjoyable summer and successful adjustment into Israeli society. And I assure them that we will be by their side every step of the way.”