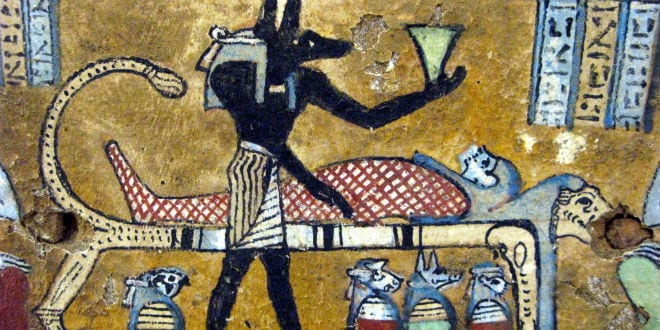 In a scientific first, DNA taken from Egyptian mummies has been decoded, producing unexpected results about the true origins of the Egyptian people. These results confirm a controversial theory that traces the First Egyptian Dynasty back to Biblical Ham, as described in the Book of Genesis.

Scientists have long been baffled by the origins of the Egyptian people. Until now, there was no empirical data to clarify the issue. The study of Egypt’s population history could only draw on literary and indirect archaeological references, and inferences made from genetic studies of present-day Egyptians. Based on these sources, most researchers believed that ancient Egyptians came from nearby northern Africa. Egyptians today exhibit a significant sub-Saharan genetic influence.

This scientific belief long contradicted the Biblical account, which designates the forefather of Egypt as being Mizrayim, a son of Ham.

Of these were the isles of the nations divided in their lands, every one after his tongue, after their families, in their nations. And the sons of Ham: Cush, and Mizraim, and Put, and Canaan. Genesis 10:5-6

According to the Bible, Mizrayim settled in Egypt whereas Cush settled in Africa, establishing two distinct and separate nations that did not share a common heritage. The scientific theory implies the origins of Africa and Egypt were the same.

A recent study of the DNA of mummies, led by Johannes Krause of the Max Planck Institute for the Science of Human History, has shed some light on the subject, and his findings support the Biblical narrative.

Previous attempts to study the DNA of mummified remains were inconclusive. The hot climate of Egypt combined with the embalming process practiced by ancient Egyptians destroyed most DNA. For this study, researchers sampled 151 mummies from Abusir el-Meleq, about 60 miles south of Cairo. Their samples spanned 1,300 years of ancient Egyptian history, from about 1388 BCE to 426 CE.

The researchers were able to collect 90 samples of mitochondrial DNA and three samples of genomes, the total of an organism’s DNA. The surprising results showed that ancient Egyptians were more closely related to populations from the Near East and southwest Asia, and not from northern Africa as previously thought.

“In the ancient Egyptians, we don’t find much at all sub-Saharan African ancestry,” Krause told CBC News. “They look very Near Eastern and have almost zero sub-Saharan African ancestry.” This, Krause said, illustrates that ancient Egyptians were more closely related to Europeans than they are to modern-day Egyptians. The study revealed that the African influence on Egyptians is relatively recent, entering into the gene pool after Roman times.

These new findings fit in with the Dynastic Race Theory espoused by archaeologist David Rohl. Rohl’s theory is that the ancient Egyptians arrived over sea from Mesopotamia, conquered the Nile Valley, and established the first Egyptian dynasties. This is in direct contradiction to the previous theory that the first Egyptian rulers and much of the population arrived by a land route from Africa.

Rohl based this theory, which he explained in his book Legend – The Genesis of Civilisation, on the Biblical account of Ham, the son of Noah. According to Rohl’s theory, Ham and his people moved from Mesopotamia to settle in Egypt after the flood. Rohl explains that this is the basis for Horus, one of the most significant Egyptian deities, who was, in fact, Ham. The name ‘Horus’ means “the distant one”, implying that he came from far away.

To confirm his theory, Rohl led an expedition in 1988 into Wadi Hammamat, a dry river bed in Egypt’s Eastern Desert that is the main desert route from the Nile to the Red Sea. Rohl studied ancient wall carvings and drawings depicting boats that had been discovered fifty years earlier by archaeologist Hans Winkler. Over 100 of these carvings depicted long boats with as many as 70 oarsmen.

These images conformed to Rohl’s theory that a sudden period of cultural and technological  development during the First Dynasty in Egypt was the result of an influx of Mesopotamian elite who arrived in Egypt by sailing around the coastline of the Arabian Peninsula into the Red Sea and ultimately dragging their boats across the desert to the Nile.