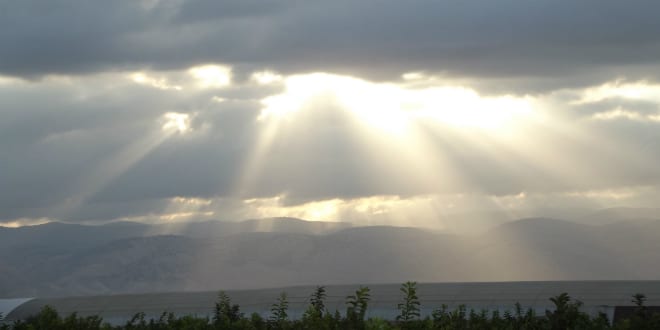 Israelis got an unseasonable reminder of God’s ability to do the improbable when, on Wednesday, the official first day of summer, scattered rain fell from the north, down the coast, and even in the normally arid northern Negev. The unexpected wetness only lasted a few hours, disappearing before anyone could think to unpack their umbrella. Meteorologist assured everyone that the precipitation was an anomaly and that dry heat was on the ticket for the rest of the summer.

The rainy season usually begins in Israel around October and may linger until March. Jewish prayer mirrors the season in Israel and the prayers for rain begin on Shemini Atzeret, the last day of the holiday of Sukkot. Rain can be expected until April, so today’s rain was entirely unexpected, the result of a freak flow of air from Turkey causing an imbalance of temperatures over the Mediterranean.

As many looked to the heavens, their faces strangely damp, they were reminded that Judaism is, at its essence, an agricultural religion closely tied to nature and the seasons. Though rain is normally a sign of blessing, in the Bible, summer rain is viewed as a negative phenomenon, unexpected and out of place, as noted in Proverbs.

As snow in summer, and as rain in harvest, so honour is not seemly for a fool. Proverbs 26:1

Jews ceased praying for rain two months ago when Passover began. Just as seasonal rain is necessary to bring forth the blessed bounty of the land, rain out of season can be a curse, rotting the sheaves of wheat as they dry in the fields.

According to Jewish scholars, it was precisely in this month when, in his farewell speech,  the Prophet Samuel called out to God, angry that the Jews had asked for a king.

Is it not wheat harvest to-day? I will call unto Hashem, that He may send thunder and rain; and ye shall know and see that your wickedness is great, which ye have done in the sight of Hashem, in asking you a king.’ I Samuel 12:

From this we learn that rain out season can be a tool for divine retribution and used to harm Israel.

Rabbi Yitzchak Batzri cited the Mishna (oral law), which states that rain after the month of Sivan (last month) is a bad omen. Nonetheless, the rabbi noted that this opinion is not universal, and in the current situation in which Israel is suffering a multi-year drought, rain, even when it falls out of season, can be seen as an exceptional sign of grace.