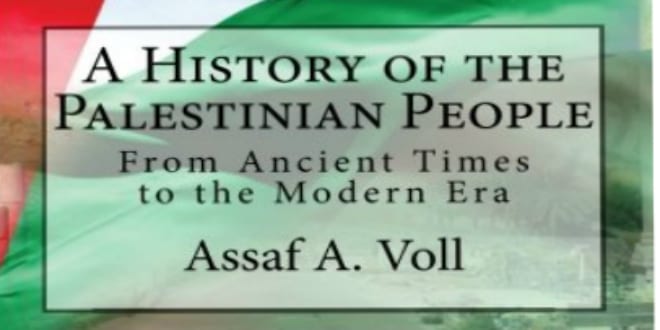 A book published last week is intended to be the final word on the subject of Palestinian history. The author, Assaf Voll, a former lecturer at the University of Haifa, spent many years researching thousands of sources, meticulously reviewing libraries and archives worldwide, to produce what he touts as “the most comprehensive and extensive review of some 3,000 years of Palestinian people’s unique contribution to the world and to humanity”.

Titled, “A History of the Palestinian People: From Ancient Times to the Modern Era”, the final product of all that extensive research is quite impressive: 120 blank pages.

To be accurate, it is 120 blank pages in Hebrew. The English language edition, translated expeditiously by Alan Slater, is slightly longer.

“The translation into German has already exceeded 140 pages and we are still only halfway done,” Voll told Breaking Israel News.

Available on Amazon, there are currently no reviews, its author assures the public that it is riveting, a real page-turner, with most readers finishing it in one sitting.

“I am a student of history and this is not intended as a joke,” Voll said with total sincerity. “My approach to history is, of course, minimalist. Before setting out to write this book, I never heard of the ancient history of the Palestinian people. I decided to be a pioneer in this field of research. The pages are empty, so anyone who has any facts to add to the narrative is invited to add their knowledge to the sources I already cited.”

To be candid, Voll’s concept is not entirely new. The Palestinian Authority spent 20 years and and millions of dollars to create a museum of their national heritage. When it opened last May in the city of Birzeit, the building was empty.

Voll works as a creative director for the Zelliger Shomron advertising agency in Tel Aviv. Lest anyone misinterpret his motives, Voll did not intend his literary endeavor as an insult to the Palestinian people.

“The ones who insult the Palestinians are the politicians and the historians who try to hold them to an impossible lie,” Voll insists. “In the end, it is this lie about history that harms the Palestinians.”

Claiming to be a political hybrid (right wing on foreign policy and left wing on domestic affairs), Voll is not antagonistic to the Palestinians or insensitive to their suffering. He wrote his book as an aid to expose a lie that he believes harms them.

“When the Palestinians believe these lies and try to build a country, like in Gaza, they suffer horribly and end up killing each other.

“They don’t have a history or any of the necessary traits to be a nation, so they are building their empire on sand, and in the end it just collapses on them.”

Voll believes this fake history has hijacked the political agenda as well.

“The dialogue between Israel and the Palestinians is necessary and has a purpose,” Voll said. “Though it is true that truth is very subjective, but I think the political dialogue lacks the sincerity necessary in any dialogue.”

For those who find it difficult to read such weighty academic material, there is a solution. Voll says that a movie deal is in the works.