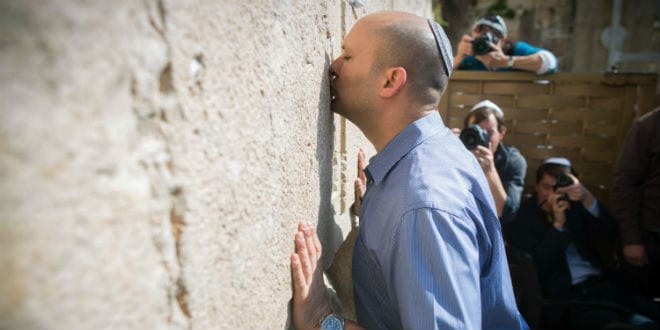 Education Minister Naftali Bennett (Jewish Home) has proposed new legislation aimed at preventing the separation of Jerusalem for purposes of peace negotiations with the Palestinians.

The bill would require a supermajority – 80 members – of the Knesset to approve any measure touching on the division of Jerusalem, a move many expect to be a component of any “peace” deal between Israel and the Palestinians.

“I am convinced the entire coalition and sensible opposition will join forces behind this important legislation,” Bennett said at the start of Sunday’s cabinet meeting, adding that such a bill must be passed before any new talks begin.

“Timing is crucial, since it is important to make clear, before the start of a diplomatic process, that Jerusalem will never be divided under any circumstance,” he vowed.

Normally a bill requires only 50 votes to pass. If Bennett’s legislation is approved, it would be much more difficult to attain the number of votes needed should the Knesset ever debate a move to cede part of Jerusalem to the Palestinians.

Bennett pointed out that several former prime ministers had proposed giving up part of Jerusalem to the Arabs, but that the notion was “obsolete.”

“The ideas put forward by Ehud Barak in 2000 and Ehud Olmert in 2007 to hand over the Old City, Temple Mount and the Mount of Olives to the Palestinians – are obsolete. I am certain the bill will easily pass.”

“Whoever presents such baseless initiatives doesn’t really care about Jerusalem but only about destroying the diplomatic process and the chance of guaranteeing a Jewish and democratic Israel,” Herzog tweeted.

Bennett replied on Twitter, “The opposite, Herzog. The only way to real peace is to make clear from the start that Jerusalem is not a subject for negotiation.”