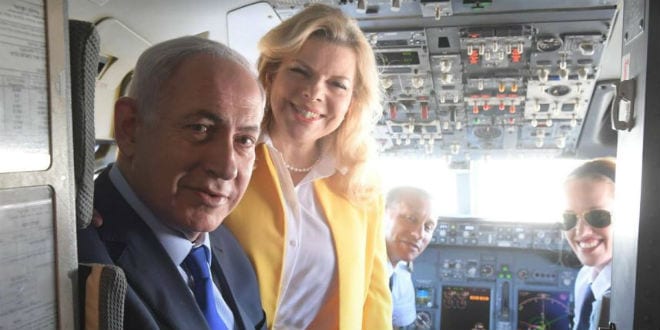 For the first time ever, Israel’s Prime Minister Benjamin Netanyahu was flown for a state visit to Greece by a pilot who is an Orthodox Jewish woman.

The pilot, Nechama Spiegel-Novack, is a married mother of four and member of an Orthodox congregation in Jerusalem. “This is another first for Israel,” noted Dr. John A.I. Grossman, Chairman of LIBI USA, the official welfare fund of the IDF, to Breaking Israel News. “Israel not only has the most advanced army and technology, it is also the most advanced country in the world for giving opportunities to women to fulfill their dreams, including religious women.”

According to a report in Israel’s Yediot Ahronot, Spiegel-Novack attended an Orthodox day school in Jerusalem in her youth. She is quoted as saying that “her dream of life has always been to be a pilot, and my husband helps me a lot.” Her family says it is proud of her accomplishments.

Spiegel-Novack began training as a pilot in the US when her urge to fly took hold.

She received her pilot’s license and applied to Israel’s El Al pilots’ course in 2005. Though technically qualified, she did not have sufficient hours in the air to enter the program.

“Most candidates for the El Al pilots program gain flight time while serving in the Israeli Air Force,” explained Grossman. “Therefore, Spiegel-Novack continued flying in the US until she could garner enough hours to be accepted to the El Al program.”

Spiegel-Novack began the El Al program in 2015. During this training, she gave birth to her fourth child, which extended the time it took her to gain her wings. She completed the program several months ago.

PM Netanyahu’s plane was flown by two pilots: Captain Yinon Hadar and Spiegel-Novak. Netanyahu is attending a two-day summit in Thessaloniki, alongside leaders from Greece and Cyprus.

“We are seeing an increase in women breaking the glass ceiling through Israel’s increase in opportunities to serve in its army and now with this praiseworthy accomplishment of Spiegel-Novack,” reflected Grossman. “Now, all we need is a new opportunity for a lasting peace.”