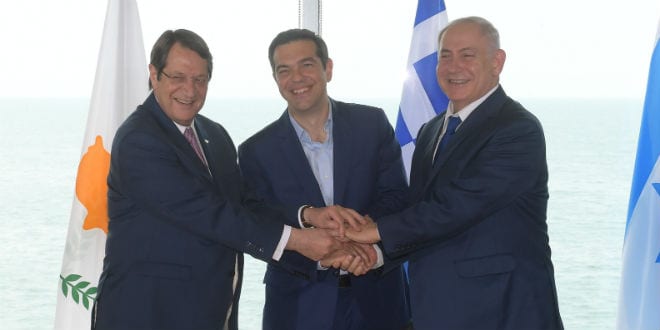 Plans for an ambitious underwater natural gas pipeline dominated a trilateral summit between Israel, Greece and Cyprus in the northern Greek city of Thessaloniki, Thursday.

Prime Minister Binyamin Netanyahu, his Greek counterpart Alexis Tsipras and Cypriot president Nicos Anastasiades said plans would be expedited to develop a pipeline to carry natural gas from Israeli and Cypriot reserves in the eastern Mediterranean to Europe.

At over 2,000 kilometers in length and costing over $6 billion dollars, the so called East-Med pipeline would be among the world’s longest.

“We agreed to fast track our common actions towards the new [gas] pipeline which will connect Israel and Cyprus with Greece and the rest of Europe,” Tsipras said at  a press conference following the summit.

Tsipras said the project would offer new prospects of economic cooperation in the eastern Mediterranean, while Netanyahu called it “an audacious plan” and said it “would be a revolution”.

“We’ve had preliminary studies of it and it seems promising and we’re going to look further into it. It’s something we’re very excited about,” he said.

The sides are also examining a 2,000 megawatt underwater electricity cable, the EuroAsia Interconnector,  to be laid together with the pipeline that would link the electricity grids of the three countries.

According to the Cyprus Mail, a Greek government official said Greece had also proposed adding fibre optic cables to the project.

Prior to the summit, Netanyahu attended the unveiling of a plaque to mark the construction of a Holocaust museum in Thessaloniki. Some 95 percent of the city’s pre-war Jewish population were murdered by the Nazis in the Holocaust.