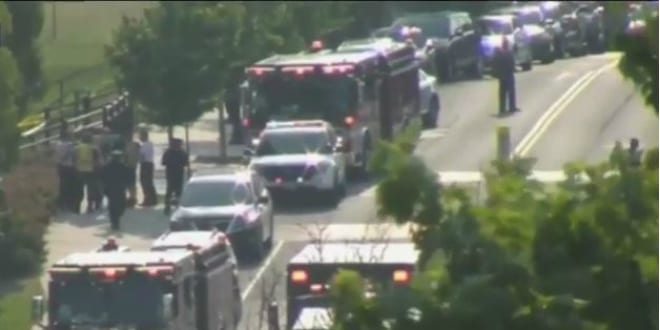 A man opened fire with a rifle on the GOP Congressional baseball practice in Alexandria, Virgina at around 7:30 on Wednesday morning, injuring  Congressman Steve Scalise in the hip, and shooting four others. Two of the injured were US Capitol Police officers, and at least one congressional staffer was shot. Scalise is reported to be in stable condition.

MSNBC reported that the gunman had inquired whether the politicians at the practice were Democrats or Republicans before opening fire. At the time of the shooting, the Democrats were practicing at a separate field.

More than 50 shots were reported to have been fired before security forces on the scene succeeded in stopping the attack. The police reported that the gunman is now in custody, but did not release his name.

“Had [the Capitol Police] not been there, it would have been a massacre,” Senator Rand Paul told CNBC.

The congressmen were  practicing for the annual Congressional baseball game scheduled for next Thursday at Nationals Park. The traditional charity event pits members of the Democratic and Republican parties against each other.

Republican Representative Mo Brooks, who was at the scene and used his belt as a tourniquet to stop the bleeding of Scalise’s wound. He described the attacker on FM Talk 1065 simply as, “white, skinny and middle aged”.

Scalise, a representative from Louisianna, is a prominent supporter of President Donald Trump. He serves as the Republican majority whip in the House of Representatives, the congressman responsible for counting votes and maintaining party discipline.

“The Vice President and I are aware of the shooting incident in Virginia and are monitoring developments closely. We are deeply saddened by this tragedy. Our thoughts and prayers are with the members of Congress, their staffs, Capitol Police, first responders, and all others affected,” President Trump said in a statement.