7,000 Foreign Athletes to Descend on Jerusalem for 20th Maccabiah Games This Summer

Home » 7,000 Foreign Athletes to Descend on Jerusalem for 20th Maccabiah Games This Summer 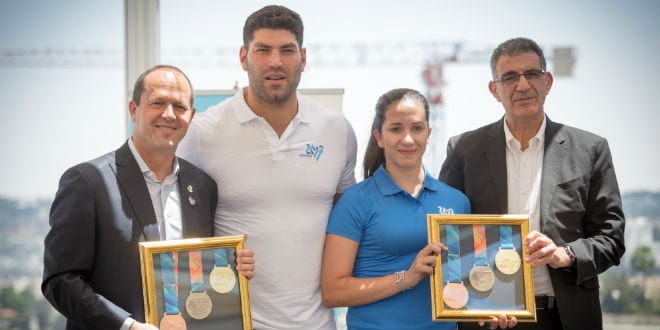 Some 7,000 foreign athletes 80 countries will arrive in Israel on July 4 for the 20th Maccabiah Games, where they will join around 2,500 Israeli athletes in the quadrennial Olympic-style competition for the Jewish world.

The games, which this time around are themed 80 Countries, One Heart, include 40 different sports, with competition taking place in four categories: Youth, Open, Masters and Paralympics. In addition to the athletes, more than 20,000 family members and sports fans will attend the games from abroad,  contributing approximately NIS 350 million to the tourism sector.

“The Maccabiah strengthens the connection, solidarity, brotherhood, and understanding between the Jewish communities of the world and illustrates  the fact that sport is a social tool and a bridge between people,” Yossi Sharabi, Director General of the Ministry of Culture and Sport told a press conference at the Mamilla Hotel in Jerusalem on Tuesday.

To mark the 50th anniversary of the city’s  reunification, the capital was chosen to host the games, which will officially begin with an opening ceremony at Teddy Stadium in the capital on July 6.

“Fifty years after reunification, we have finally returned the Maccabiah to its rightful place, Jerusalem—the capital of Israel, ” said Jerusalem Mayor Nir Barkat.

Competitions will take place at more than 120 facilities in 68 sports complexes around the country. The biggest competition is soccer with more than 1,400 athletes from 20 countries. In Jerusalem, some 3,000 athletes will participate in 14 sports including ice hockey at the Pais Arena and athletics in the renovated Givat Ram stadium.

“The Maccabiah is the most exciting event of the year. It combines all the values that I believe in – Zionism, Judaism, brotherhood, bringing people together and sports,” said Maccabiah Chairman Amir Peled.