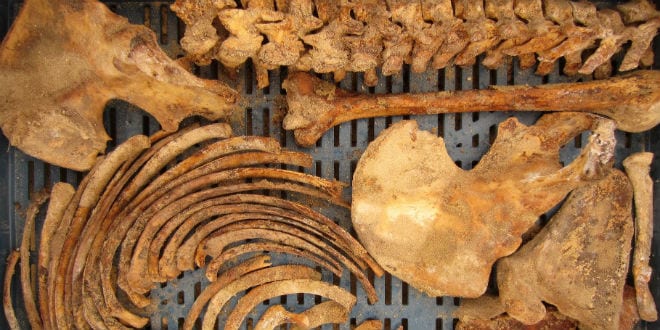 An archaeologist in Egypt has discovered a cemetery full of child slaves from the time of the pharaohs, a chilling find which echoes the Biblical account describing the difficulties the Hebrews suffered in Egypt. That finding, and several others, connect an famous pharaoh and his city to the Biblical narrative describing the Hebrews’ pre-Exodus experience in Egypt.

Archaeologist Mary Shepperson uncovered something entirely unexpected at the archaeological dig at Amarna in Upper Egypt. After studying the cemetery at the southern end of the ancient ruined city with expected results, she moved to a separate burial site at the northern end. What she found at the new site shocked her: narrow graves containing multiple bodies, buried with little ceremony or care. Altogether, 105 sets of remains were found. But the most shocking discovery was that all of the remains belonged to young people whose bones showed signs of brutal labor and neglect.

The haphazard disposal of the bodies, 90 percent of whom belonged to youths between the ages of 7 and 25 at time of death, pointed clearly to the conclusion that the children had not been buried – or cared for – by their families, which led Shepperson to conclude that the children were likely slaves.

“Family was very important in ancient Egypt and it was the responsibility of relatives to see that dead family members were properly provided for in the afterlife,” explained Shepperson in a report on her findings in the Guardian. “This strongly suggests that they were not returned to their families for burial but lived and died away from the care of relatives…The children seem to have been removed from their families with little intention of them being returned.”

While no DNA evidence has determined their nationality, Professor Shepperson’s hypothesis holds similarities to the Biblical account of Pharaoh targeting the children of the Hebrews by tearing them away from their parents.

And Pharaoh charged all his people, saying: ‘Every son that is born ye shall cast into the river, and every daughter ye shall save alive.’ Exodus 1:22

Harry Moskoff, an expert in Biblical archaeology, noted that the Biblical connection was possible despite the differences.

Though the Torah says that newborns were thrown into the Nile, Moskoff explained to Breaking Israel News, “It could be that this was only a metaphor for the children being taken away from their families into brutal slavery, not entirely unusual for the Bible. But it is already one step away from the text,” he admitted.

Moskoff was intrigued by other points connecting Akhenaten, the pharaoh who built Amarna around 1350 BCE, to the Hebrews. The city was named after the Beni Amran, a tribe that was believed to have lived in the region. The name of the tribe is almost identical to that of Amram, Moses’ father.

Cuneiform tablets found in abundance at Amarna referred to a people called the ‘Apiru’ or ‘Habiru’. Some scholars believe this is a reference to fugitive slaves. The similarity to the word ‘Ivri’ (Hebrew) is noteworthy, leading other other scholars to speculate that among the Hapiru were the original Hebrews, of whom the later Israelites were only one branch.

“Findings like these have led many archaeologists to search for the historical basis of the Exodus,” noted Moskoff.

Shepperson’s find hints at a connection between the Hebrews and Amarna, but a connection between Akhenaten and the Jews has been suggested by many scholars before this discovery. Akhenaten was known for his radical religious reform, replacing Egypt’s pantheon of gods with a monotheistic worship of a single sun god with no form or image similar to the God of the Hebrews.

Sigmund Freud, the founder of modern psychoanalysis, was convinced the connection between Ahenaten and the Hebrews was reflected in the pharoah’s reform, suggesting in his controversial book Moses and Monotheism that Moses was a follower of Akhenaten and brought Egyptian monotheism to the Hebrews.

Egyptologists reject this Biblical connection with Akhenaten. Central Michigan University Professor Charles F. Pfeiffer wrote in his 1963 book “Tell El-Amarna and the Bible” that most archaeologists place the date of Moses at 1280 BCE, almost one hundred years later than Akhenaten.

However, “There are many different theories about the exact timeline of the Hebrews in Egypt,” as Moskoff argued, citing Tim Mahoney, whose research, described in his book and documentary, Patterns of Evidence, placed the Hebrews in Egypt several hundred years earlier, precisely when Akhenaten ruled.