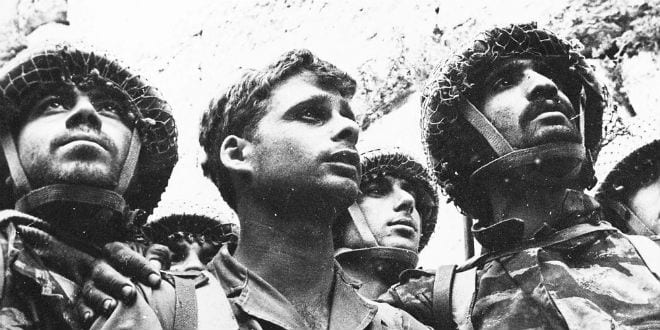 This week marks the 50th anniversary of the reunification of the Holy city of Jerusalem as a result of the miraculous victory of the Israeli army during 1967’s Six Day War. There is no mistaking the fact that this victory was a result of Divine Revelation and the fulfillment of Isaiah’s and Ezekiel’s ancient Biblical prophecies of the Jewish people’s return to Jerusalem.

In 1967, the young state of Israel was just 19 years old when she faced the threat of annihilation at the hands of her neighboring enemy armies of Egypt, Syria, and Jordan, whose stated goal was to “drive the Jews into the Sea” and see the destruction of Israel.

In a turn of events that can only be described as miraculous, Israel not only defeated the Arab armies, but her troops liberated and returned to Jerusalem, the Gaza Strip, the hills of Samaria and Hebron, the Sinai Peninsula and the Golan Heights- all of which had previously been under enemy rule.

This unprecedented military victory, which no one on Earth expected, can only be attributed to the Hand of God. When Ezer Weizman, the Head of Operations of the Israeli Air Force in 1967, was asked to explain his army’s success, his only response was a verse from Exodus 8:15: “This is the finger of God.”

Countless books have been written on the topic of the Six Day War from academic, political or historical angles. But as so much more than a historical event, an Israeli scholar believed the war deserved to be remembered for its miraculous nature and Biblical significance.

Dr. Hagi Ben-Artzi, a lecturer of Bible and Jewish Philosophy at Bar Ilan University, was moved to narrate the events of the Six Day War from a Biblical perspective and as a continuation of the words of the Prophets of the Bible. The result of this passion is “The Six-Day War Scroll: The Story of Yom Yerushalayim and the Six Days of Deliverance”. This scroll, now available in both English and Hebrew, recounts the events leading up to, including, and following the Six Day War in the same format as the ancient Biblical Scrolls.

Just as the scrolls of Ruth, Esther and Lamentations reveal the Hand of God and his miraculous ways, so too does “The Six Day War Scroll” infuse the events of the Six Day War with religious and spiritual significance.

“In this generation and in coming generations it is our obligation to tell of the wonders and the miracles we witnessed in this war of rescue and deliverance,” Ben-Artzi commented. “No less, it is our obligation to publicize the courage and sacrifice of Israel’s soldiers, both regular and reserves, who exemplified the Jewish people’s treasure trove of spirit and spiritual resourcefulness.”

The scroll is arranged to highlight the events of the Six Day War day by day, providing the details of the individual battles fought and the geographic areas involved. Included in the scroll are full-color maps and photos which add to the appreciation of the wondrous victory of Israel’s army in 1967.

Ben-Artzi’s hope for the readers of the scroll is to praise God “for the miracles and the wonder, for the heroism and the wars, for the deliverances and comforts”, rather than commit the sin of being “a generation that did not sing praises.” Moreover, he hopes that this scroll inspires its readers to appreciate the Hand of God throughout history from the times of the Bible until today, and to realize the miraculous period of fulfillment of Biblical prophecy in which we are living.