Over 1,000 Building Permits Granted in Judea and Samaria

Home » Over 1,000 Building Permits Granted in Judea and Samaria 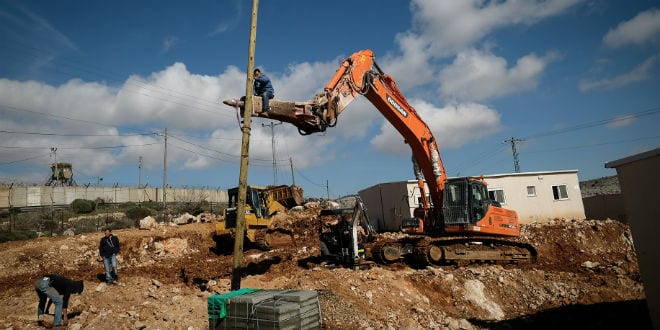 The Civil Administration’s Higher Planning Committee granted approval Tuesday for an initial batch of approximately 1,100  building permits for homes in Judea and Samaria, with about 900 more to be authorized Wednesday. The permits included 100 units for the new Amichai settlement for Amona evacuees, approximately 800 in Ariel and a hundred for the Kerem Reim outpost.

Notably, some of the housing units are located beyond the settlement blocs, despite Prime Minister Netanyahu’s previous statements that Israel would freeze construction outside the blocs following bilateral talks with US President Trump. The Civil Administration’s decision also follows a Jewish Home theat to create a coalition crisis over limited settlement building.

Netanyahu said the Six Day war did not bring the IDF into a foreign territory, and noted that Jordan’s annexation of the West Bank in 1950 was not recognized internationally. In contrast, he said the right of the Jewish people to its homeland was endorsed numerous times, including in the 1917 Balfour Declaration and the 1918 Treaty of Versailles.

“The reason we continue to hold onto the area is because there is our heart,” added Knesset Speaker Yoel (Yuli) Edelstein at the ceremony. “The true historical underpinning to our national existence lies in Judea and Samaria.  In Beit El, where Yaakov dreamt and in Hebron, where David was anointed King of Israel.”

“If we forsake those places, our national pulse will weaken. It is our role to strengthen our connection to Judea and Samaria with confidence and pride so that Israel’s connection to the area will be recognized as de jure not only de facto,” Edelstein said.

Edelstein also described Judea and Samaria as a “strategic asset of the first order,” and added that the region contributes greatly to the development of the Israeli society in terms of security, education, and immigration.