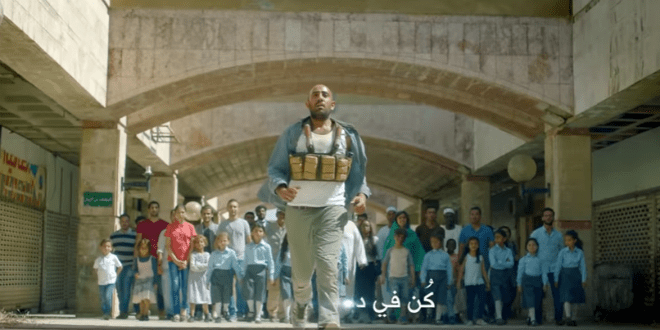 An Arabic music video with a powerful anti-terror message from inside the Islamic world has gone viral, garnering over four million views on YouTube in less than a week. But what might seem to be a long-awaited universal message has raised controversy within the Muslim community and has led experts on the Arab world to question its true intentions.

The video was released as an advertisement by Zain Group, a Kuwait-based mobile telecommunications company, just a few days before Ramadan, the month-long Muslim fast. Intended to be a time of intense religious devotion, Ramadan has in recent years become a period of increased Islamist violence. The promotional video challenges Islamist extremists who choose to express their religious fervor through violence.

The video essentially has a message of love triumphing over terror. It opens with a terrorist assembling an explosive vest in a basement. He sets out on his deadly mission with his religious declaration, “I bear witness that there is no other God but Allah.”

But as he continues to his target, he is confronted by visions of peace and love. A grandfather holding an infant sings to him, “You, who come in the name of death,  [Allah] is the creator of life.”

“Worship your God with love, with love, not terror,” the song urges. “Confront your enemy with peace, not war.”

Eventually, met by a crowd calling for love, the terrorist falls to his knees and pushes the detonator – but celebratory fireworks appear, accompanied by the lyrics, “Let’s bomb violence with mercy.”

The video presents Muslims challenging Muslims on the violent aspects of their religion and how it is expressed in the modern world. Allahu Akhbar, part of the muezzin (call to prayer), is more well-known today as the final cry of shahid (martyrs) who shout the phrase before perpetrating atrocities.

In the face of rising Islamist violence, many in the West have been waiting for the elusive voice of moderate Islam to speak out against terror. Dr. Mordechai Kedar, an Israeli scholar of Arabic culture and a lecturer at Bar-Ilan University, explained to Breaking Israel News that this expectation is difficult for Muslims, even though it is clearly one with which many identify.

“By the number of views, and the overwhelming reaction from Muslims on social media, we can understand that this video reflects what many Muslims feel,” Dr. Kedar said. “But they are voiceless because they have no religious arguments against terror. Jihad (holy war) is a mitzvah (commandment) in Islam, but Muslims simply don’t know where is the line separating jihad from terror.”

In fact, the responses from within the Arab world were mixed, with some praising the message, while others criticized. An article in the New York Times noted that many were critical of using terrorism to sell products. Others objected to the assertion that terrorism was an Islamic problem.

Dr. Kedar said that in general, Islam has a conceptual difficulty in defining terror.

“In Islam, terror is a valid form of warfare called muqawama (resistance),” Dr. Kedar said.  “Many individual Muslims object to terror, but anyone who openly objects to terror sets himself as an apostate to the Koran. He also sets himself up as a target for terror.

“Declarations like this can be taken by governments and organizations that support terror, and used as a cover for their violent agenda,” Dr. Kedar continued. “Unfortunately, before accepting this at face value, as a refutation of terror, the source has to be taken into account.”

The video defined terror in an Islamic-centric manner not entirely understood by Westerners. It featured Omran Dangeesh, a boy who survived an attack in Syria last year. The photograph of Dangeesh in the back of an ambulance covered in blood and dust became an online icon of the suffering in Syria. Though clearly tragic, Dangeesh was the victim of a Syrian army regime attack and not what most Westerners would consider an act of terror.