Does Freak Lightning Over England Presage Messiah as Described in Job? [VIDEO]

Home » Does Freak Lightning Over England Presage Messiah as Described in Job? [VIDEO] 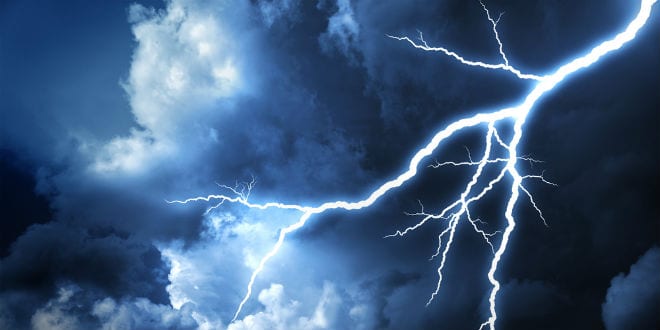 A massive lightning storm that hit southern England last Sunday could be a sign that the end-of-days is imminent, a prominent rabbi claimed in Jerusalem on Wednesday, pointing to a hint in the Bible that may specify the British Isle as the target of this pre-Messianic wake-up call.

All eyes in Southeastern England turned to the heavens on Sunday night as over 120,000 lightning strikes were recorded in 12 hours, coming freakishly at the end of a hot and sunny weekend. At its peak, over 500 lightning bolts flashed through the sky every minute. Flights were diverted away from the stormy skies while the celestial fire ignited houses on the ground.

Rabbi Yosef Berger, rabbi of King David’s Tomb on Mount Zion, noted that lightning figures prominently in the Bible as an accompaniment to the Messiah.

He pointed to a verse in the Book of Job which prophesies that thunderbolts will be sent out from the heavens before Messiah and identified the lightning in England as this aspect of geula (redemption).

He sendeth it forth under the whole heaven, and His lightning unto the ends of the earth. Job 37:3

The rabbi explained that the name “England” literally means the edge or angle of the earth. Indeed, so prominent was this belief amongst Christians and Jews that in 1650, Rabbi Menasseh ben Israel, a Portuguese Kabbalist, used it in his successful plea to the British Parliament to end the 350-year exile of Jews from England. He reasoned that after discovering Israelites in South America, all that was lacking to fulfill the prophecy of Jews being scattered to “the ends of the earth” was the reintroduction of Jews to England.

The divine role of lightning is emphasized repeatedly in the Bible, he added. “The Bible says clearly in Psalms that lightning will be like a spotlight, revealing the truth in the end of days.”

His lightnings lighted up the world; the earth saw, and trembled. Psalms 97:4

“But for those who are working against God, lightning will indeed be an actual means of punishment,” the rabbi warned.

He referenced a well-known Biblical event involving lightning, explaining, “The lightning at Mount Sinai was a preview of what will be in the end of days when lightning will again play a key role.”

And all the people perceived the thunderings, and the lightnings, and the voice of the horn, and the mountain smoking; and when the people saw it, they trembled, and stood afar off…And Moshe said unto the people: ‘Fear not; for God is come to prove you, and that His fear may be before you, that ye sin not.’ Exodus 20:14

“Just as powerful lightning at Mount Sinai was not meant to harm, not divine retribution, also in the end-of-days lightning serves a specific purpose,” Rabbi Berger said. “For people who recognize the God of Abraham, it is like an alarm clock, waking them up, telling them to prepare for what is about to happen.”

Rabbi Berger explained that the message of the lightning was sent to all peoples, not only the Jews.

“This is a global warning and not just to Israel. Whoever recognizes God’s rule, will be part of the geula, and will be gathered in from the far corners.”