Turkey Attempting to Take Over Jordanian Control of Temple Mount 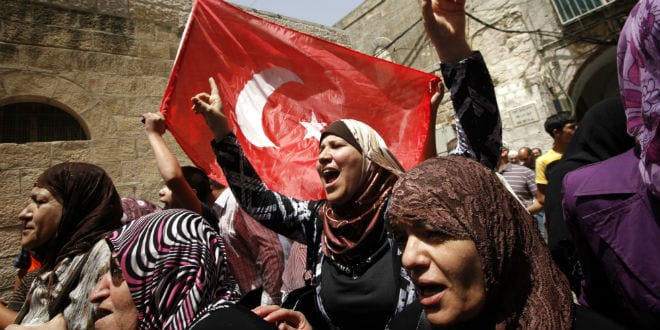 The Jerusalem municipality’s eastern Jerusalem experts have revealed in recent days that Turkey has been competing with Jordan over influence among Arab residents as well as over control of the Temple Mount, Hashiloach—an Israeli journal for thought and policy, created by the Tikvah Fund—reported last week.

The city’s experts, David Koren and Ben Avrahami, also revealed that Turkey has begun pouring millions of dollars into non-governmental organizations (NGOs) in eastern Jerusalem, in order to strengthen Ankara’s status among the Arab residents, at the expense of Jordan and Israel.

The vast majority of Jerusalem’s Arabs are Muslim – the Christian population is estimated at between 10 and 15 thousand.

“The growing involvement of the Erdogan regime, which is now the main patron of the Muslim Brotherhood worldwide, shows that the Turkish actions in Jerusalem are part of a wider process of creating regional Turkish hegemony at the expense of other players,” wrote the Jerusalem mayor’s advisers on the eastern part of the city, noting that “the biggest loser from the increased Turkish presence is Jordan, which for many years had enjoyed the status of Custodian of the Holy Places and the protector of the residents of eastern Jerusalem.

“The greatest threat to the Hashemite Kingdom on the Temple Mount comes from Turkey.”

Earlier this month, Turkish President Recep Tayyip Erdogan slammed Israel for “massacring the Palestinians,” calling on the Turks to visit the Al-Aqsa Mosque and dubbing Israel’s control of Jerusalem “an insult.” He also attacked President Donald Trump’s plans to move the US embassy to Jerusalem, and declared that “all Muslims must defend Jerusalem.”

The experts added that in May 2015, Muslim worshipers expelled the chief Jordanian Kadi from the Temple Mount, while at the same time receiving with great honor the Turkish minister of religious affairs. “In recent years, the Turks have poured considerable sums of money into the Temple Mount for a number of activities: Koran reading groups, transporting worshipers to and from the mosque, Ramadan meals, renovations, and cleaning. As a rule, whether deliberately or not, Muslim groups on the Temple Mount are acting in favor of Turkey and to the detriment of Jordan.

“In their view, replacing the Jordanian presence with Turkish presence would be a positive and welcome step,” Koren and Avrahami wrote.

“Erdogan’s Turkey now enjoys unprecedented popularity among the residents of eastern Jerusalem,” the report continued. “Turkish flags are often seen hanging from rooftops in the eastern part of the city and even on the Temple Mount, and Turkish culture is being revived, which is reflected in Turkish language courses, Turkish music and Turkish cuisine.”

One hundred years after the last Turkish soldier was chased out of Jerusalem by the invading British Empire, “Turkey’s public support for the Palestinian cause and the Al-Aqsa conflict, and their channeling of millions of dollars into eastern Jerusalem, bear many fruits in the form of sympathy and support,” the experts concluded, adding that the Turks’ “involvement is made possible by their cooperation with Muslim Brotherhood elements in the city, who are often being used as their allies and collaborators.”