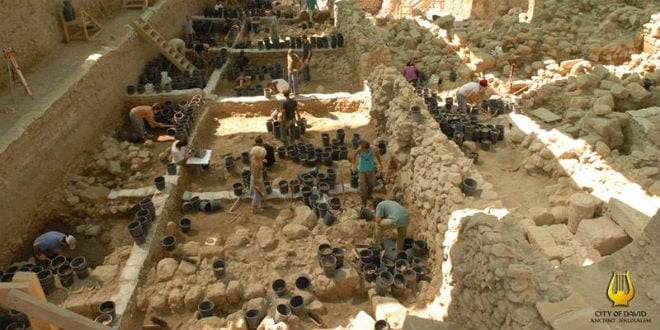 After three years of exhaustive research, archaeologists studying ancient garbage at the City of David know quite a lot about about the diet of Biblical Jerusalemites, and one thing they they can say for sure: the former residents of the Holy City kept strictly kosher.

The study, written by Dr. Yuval Gadot, Dr. Lidar Sapir-Hen and Dr. Abra Spiciarich, was published this week in the Tel Aviv Journal of the Institute of Archaeology of Tel Aviv University.  Titled “The Faunal Evidence From Early Roman Jerusalem: The People Behind the Garbage.” the research described the findings at a first century landfill devoted to garbage disposal.

“One of the main components found there was food waste, including over 12,000 animal bones, of which we identified 5,000,” Dr. Gadot told the Jerusalem Post.  “We already had a basic idea of the diet then, but when you conduct research at a garbage dump, you see everything, so this is the most comprehensive study of its kind.”

The researchers concluded that the inhabitants of Jerusalem adhered strictly to the Jewish laws of kashrut.

“We found no pork bones or shellfish whatsoever and that 70 to 80% of the bones were from sheep and goat, with a little cow and chicken bones,” Gadot said. An important aspect of the laws concerning kashrut is the method of slaughtering, which the researchers concluded was exclusively consistent with Jewish law.

“You can see by the marks on the bones how they were slaughtered,” Gadot said.

Another revelation concerned the the Temple Mount, located 2,600 feet from the dig.

The researchers were able to deduce much of the ancient lifestyle from the garbage, concluding that the garbage was dispatched to the city dump in an organized manner. They also placed the people in the middle class.

“The better parts of the animals were not consumed, which shows us that they were not very rich and not very poor,” he said. “When you go to a restaurant, you see the good cuts of the animal, and we didn’t see that here.”

Meat played a major role in the Biblical diet and was the focus of the study but future research will investigate the other aspects of their diet.

“They were definitely eating a variety of fruits, vegetables, wheats and barleys, which we will study in future research,” Gadot said.