Muslims Will Outnumber Christians Worldwide by End of Century: Pew 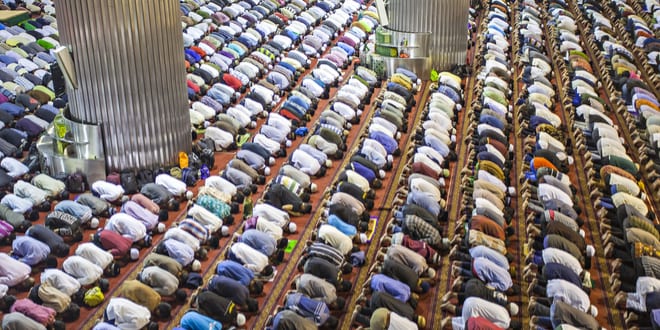 There were 1.8 billion Muslims in the world as of 2015, or about 24 percent of the human race, according to the Pew Research Center. This makes Islam the world’s second-largest religion, after Christianity, but it is the fastest-growing religion. Pew predicts that, with current demographic trends remaining as they are today, there will be more Muslims than Christians by the year 2100.

Pew also predicts that 10 percent of all Europeans will be Muslim by 2050.

What about America? In 2015 there were an estimated 3.3 million Muslims living in the US, roughly 1 percent of the population – a Pew 2014 Religious Landscape Study found that 0.9 percent of US adults identify as Muslim.

A 2011 survey of Muslim Americans, conducted in English, Arabic, Farsi and Urdu, estimated there were 1.8 million Muslim adults (2.75 million Muslims of all ages) living in the US, the majority of whom – 63 percent – were immigrants.

By the year 2050, Pew predicts that Muslims will make up 2.1 percent of the US population, surpassing Jews.

Finally, a recent Pew report estimated that the Muslim share of immigrants granted permanent residency status (a.k.a. “green cards”) is up from 5 percent in 1992 to 10 percent in 2012. There were an estimated 100,000 Muslim immigrants to the US in 2012.