Unmistakable Evidence of Battle for Temple and Jerusalem 2,000 Years Ago Discovered [VIDEO]

Home » Unmistakable Evidence of Battle for Temple and Jerusalem 2,000 Years Ago Discovered [VIDEO] 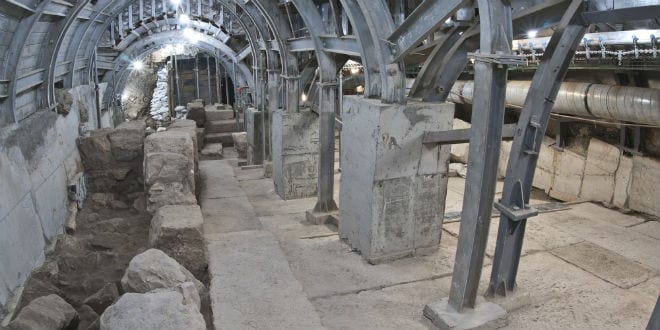 To mark Jerusalem Day and the 50th anniversary of the reunification of the city, the Israel Antiquities Authority and the Nature and Parks Authority unveiled Thursday 2,000-year-old evidence of the battle for Jerusalem on the eve of the destruction of the Second Temple.

Speaking at a press exhibition at the City of David in the Jerusalem Walls National Park, Israel Antiquities Authority archeologists Nahshon Szanton and Moran Hagbi showed a collection of arrowheads and stone ballista balls they discovered on the main street that ascended from the city’s gates and the Pool of Siloam to the Temple.  They said the finds tell the story of the last battle between Roman forces and the Jewish rebels who had barricaded themselves in the city, a battle that resulted in the destruction of Jerusalem.

The battle is described by the historian Flavius Josephus: “On the following day the Romans, having routed the brigands from the town, set the whole on fire as far as Siloam”. (Josephus, Wars, Book 6:363)

“Josephus’ descriptions of the battle in the lower city come face-to-face for the first time with evidence that was revealed in the field in a clear and chilling manner,” said Stanton and Hagbi the directors of the excavation. “Stone ballista balls fired by catapults used to bombard Jerusalem during the Roman siege of the city, were discovered in the excavations. Arrowheads, used by the Jewish rebels in the hard-fought battles agains the Roman legionnaires were found exactly as described by Josephus.

“This conclusion in fact sheds new light on the history of Jerusalem in the late Second Temple Period, and reinforces recognition of the importance of the Roman procurators’ rule in shaping the character of Jerusalem,” they added.

The ancient road is approximately 100 meters long and 7.5 meters wide, paved with large stone slabs as was customary in monumental construction throughout the Roman Empire. The archaeological excavations on the street utilize a combination of advanced and pioneering research methods, the results of which so far strengthen the understanding that Herod the Great was not solely responsible for the large construction projects of Jerusalem at the end of the Second Temple period.

The Last Battle of Jerusalem

Recent research indicates that the street was built after Herod’s reign, under the auspices of the Roman procurators of Jerusalem, and perhaps even during the tenure of the Roman governor Pontius Pilate, who is also known for having sentenced Jesus to death by crucifixion.

According to Dr. Yuval Baruch, the Jerusalem region archaeologist for the IAA, the excavation of the site will continue until the entire road is exposed, a process that is expected to take five years.

“When the excavations are completed, the remains of the street will be conserved and developed and made ready to receive the tens of thousands of visitors who will walk along it,” said Baruch.