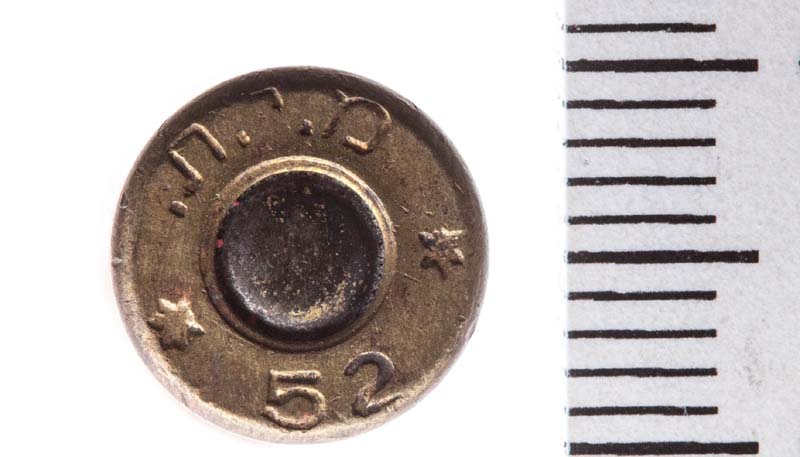 As Jerusalem celebrates the 50th year since its reunification, machine gun magazines, bullets, Jordanian coins, and military uniform badges have been found in sifting the soil from the Temple Mount. The artifacts tell the story of the unification of Jerusalem during the Six-Day War.

The Temple Mount Sifting Project has been making these discoveries daily as they work with soil and artifacts originating from the southeastern corner of the Temple Mount, to the north of the subterranean “Solomon’s Stables” structure. In 1999, an estimated 400 truckloads of archaeologically saturated earth were illicitly removed from this location by the Islamic Waqf. The sifting has yielded over half a million artifacts dating from prehistoric to modern times.

Among the artifacts from the Temple Mount Sifting Project are tens of items which may be related to the IDF’s arrival at the Temple Mount during the Six-Day War. Although these are not ancient archaeological artifacts, they have great historic significance and may teach us about our recent history. It is usually thought that no battle took place on the Temple Mount during the Six-Day War, but the ammunition that was found in the removed soil raised some doubts among the Sifting Project staff regarding this premise.

The artifacts include a 25-round magazine of an Uzi sub-machine gun, which served as the personal weapon of every IDF commander. There are also several 9mm bullets – the Uzi’s ammunition. A number of 9 mm bullet casings were found as well.

One casing, which was produced abroad, has a manufacture date of 1956. Another 9 mm casing was manufactured in 1952 and has the Hebrew letters “MIT,” which is an acronym for the State of Israel, Military Industry. These bullets and casings attest to the fact that outdated ammunition was in use during the Six-Day War.

In addition, a 7.62mm blank cartridge with a headstamp date of 1957 was found. This round was probably used for firing an anti-tank grenade from a Belgian made FN semi-automatic rifle which was commonly in service by the IDF at the time. Among the ammunition that was found were two 50mm projectiles which had probably been fired from a Browning heavy machine gun. The bullet tips are warped, indicating that they hit a hard surface. It is likely that these bullets originated in the return fire of the IDF soldiers pinned down on the Kidron Bridge, who were shooting at the Jordanians positioned on the Eastern wall of the Temple Mount.

IDF forces entered the Old City and the Temple Mount through the Lions’ Gate on Wednesday, June 7, 1967. The Jordanian forces had fled the city early in the morning, but some resistance pockets and sniper positions remained manned on the Temple Mount and throughout the Old City. The previous day, the Jordanian military was positioned on the eastern city’s wall, of which the Temple Mount’s Eastern wall is a significant part. On the night of June 6, a special commando unit and some tanks were ordered to capture the Mount of Olives.

They got lost and instead of reaching the road towards the Augusta Victoria building, they reached the Kidron Bridge to the Gethsemane Church. The bridge’s location left them completely open to massive fire from the Jordanian positions on the wall above, and five soldiers were killed. During the rescue attempts, IDF soldiers on the bridge fired back at the Jordanian positions. The story of this engagement is described well by Moshe Natan in his book, “The War for Jerusalem.”

Rabbi Yoel Bin-Nun, who was part of the paratroopers force that entered the city through the Lions’ Gate, has recalled that “following the Kidron Bridge battle, the commander of the Jordanian battalion in the Old City asked permission to evacuate the Old City, since he realized that the IDF was encircling it. The Egyptian General of the Eastern front did not understand the symbolic significance of the Old City and the Holy Sites [for Jordan] and allowed the retreat. The Jordanians fled the city early in the morning (on June 7). The IDF was not aware of that, and at 7 AM bombarded the city walls with artillery fire in order to make the Jordanian soldiers withdraw from the walls. One artillery shell that missed the target killed three of our soldiers […] From the minaret near the Gate of the Tribes, a Jordanian soldier shot at us, but we managed to take him down before he could hit one of our men. As we entered the gate into the Temple Mount, paratroopers shot bursts of fire into the air to intimidate [the Jordanians], but Motta Gur (the commander of the brigade) immediately gave his famous order, ‘Cease Fire! All forces cease fire! A holy place, do not shoot. The Temple Mount is in our hands.’”

Yaakov Goldfine, a sniper in the Jerusalem Brigade who entered the city from the Dung Gate, recalled the weapons used during the war: “We were using an English Enfield rifle which we upgraded to be used as a sniper rifle. For backup, we had the Belgian FN which was used by the infantry soldiers. […] I entered the gate and ascended the Temple Mount. It was easy to see how the Jordanians had used the Temple Mount as a military fortification. In spite of that, our orders were not to shoot at the Old City with heavy weaponry or bomb it from the air. The elimination of the Jordanian positions was done by the infantry forces, and it cost us lives.”

Among the coins discovered by the Temple Mount Sifting Project are four corrugated aluminum Agora coins. These are Israeli coins minted in 1967 and 1968 which must have fallen out of the pockets of IDF soldiers or the first Israeli visitors who arrived at the Temple Mount following the Six-Day War.

The sifting yielded nearly forty Jordanian coins. Almost all the coins were minted prior to the Six-Day War, when the area was under Jordanian control from 1948-1967.

The Temple Mount Sifting Project was founded in 2004 and is directed by Dr. Gabriel Barkay and Zachi Dvira (Zweig). The Project is under the auspices of Bar-Ilan University. The sifting was done with the assistance of the National Parks Authority and the City of David Foundation. The research of the artifacts discovered by the project is funded by private donations via the Israel Archaeology Foundation.