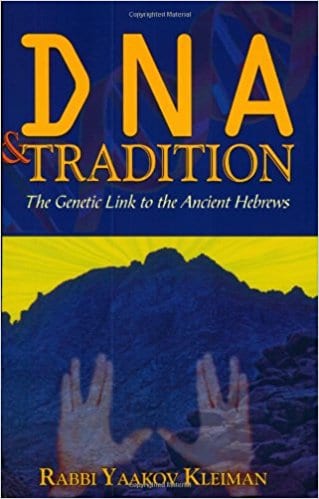 “Genetics connects modern Judaism to the Bible, confirming 3,000 years of Jewish tradition,” explained Rabbi Yaakov Kleiman to Breaking Israel News. “This is an amazing testament to God’s covenant and the Jewish People. Despite more than 2,000 years of exile we have maintained our religion, our customs, our Torah, and our genetic identity.” Manifesting prophecy is Rabbi Kleiman’s daily work. He opened the Center for Kohanim in Jerusalem nine years ago as a practical endeavor, and has authored a book on DNA evidence of the priesthood. Kohanim, or priests, are Jewish men believed to be descendants of Aaron, the first high priest of Israel. The Temple service may only be performed by kohanim.

In his effort to designate priestly candidates, Rabbi Kleiman has turned to genetics as an aid. This tools first became available 20 years ago when genetic researchers in Haifa discovered a Y chromosome, a genetic marker passed from father to son, that indicated a common ancestry for Jewish men whose family traditions hold that they are descended from the Biblical priestly class.

Rabbi Kleiman is using this science for a purpose the researchers probably had not envisioned: to help prepare for the Third Temple.

“According to prophecy, there will be a Third Temple, and when there is, we will need to identify the priests,” Rabbi Kleiman explained to Breaking Israel News. “Kohanim are the manpower of the Temple. Without them, it is an empty building.”

But the Kohanim the Leviim the sons of Tzadok that kept the charge of My sanctuary when the children of Yisrael went astray from Me they shall come near to Me to minister unto Me; and they shall stand before Me to offer unto Me the fat and the blood saith the Lord GOD. Ezekiel 44:15

As a kohen himself, Rabbi Kleiman has a personal interest in the work.  He is essentially tracing his own family tree back 106 generations. For him and other kohanim, the results have prophetic implications.

The rabbi noted that this genetic phenomenon represents scientific proof of the most long-lasting unbroken tradition known to modern man. He attributes this to the eternal aspect of the priestly covenant described in the Bible.

“This scientific proof is an affirmation that, as the Torah said, the priestly covenant would be eternal,” the rabbi said, citing the Book of Numbers.

And it shall be unto him, and to his seed after him, the covenant of an everlasting priesthood. Numbers 25:13

Priests are a subset of the Tribe of Levi, but this genetic tool has proven ineffective in identifying the Levites, who also have a role in the Temple.

“Levi is the same concept and you would expect the same genetic markers but there is not the same percentage of the J group, the genetic marker showing that Jews originated in the Middle East. This indicated that the tradition of being a Levi is not as strong as that of kohanim,” Rabbi Kleiman explained.

He speculated that the rituals and the stringencies connected with being a kohen strengthened the tradition. Kohanim are forbidden from marrying converts or divorcees. Also, the public nature and honor associated with giving the priestly blessing in synagogue make identifying kohanim a significant part of the Jewish community.

Similarly, genetics has been unable to find markers for the individual tribes of Israel.

The rabbi noted that genetics will not have the final word. According to Jewish tradition, Elijah the prophet will appear before the Messiah to clarify precisely this issue: who is a priest and who is not, and the tribe to which each Jew belongs.

Nonetheless, the rabbi does not feel that this final clarification will render his work futile. He hopes that when Elijah arrives, the genetically verified kohanim will already be hard at work in the Third Temple.

“When Elijah arrives, If he wants the DNA information, we will be happy to give it to him,” Rabbi Kleiman joked. “But he will probably be making his determinations based on a higher source.”